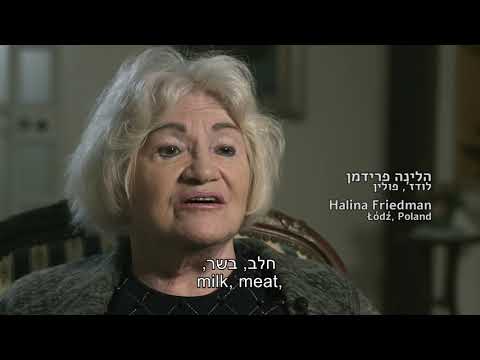 Halina Friedman was born in Lodz, Poland in 1933, the only child of her parents Wolf and Anna Herling, who were prosperous merchants. Anna spoke fluent German, had an "Aryan" appearance, and was a practical and resourceful woman – which would help her save Halina and other family members during the Holocaust.

With the conquest of Poland, Anna sewed a considerable amount of money into the hem of Halina's dress, and the family fled to Warsaw. When the ghetto was sealed at the end of 1940, the family was confined inside, where they lived with Anna's sister's family in one apartment. From the apartment window, Halina could see bodies lying on the ground. "The memory of hungry people in the streets and bodies carried off in carts has always stayed with me," says Halina. Wolf and Anna were put to work in a factory that repaired uniforms for the German Army, and Halina was placed in a kindergarten set up for the workers' children.

One day, during the Great Aktion in the summer of 1942, the children were taken out to a nearby spot and shot at by machine gun. Halina fell, but was not injured. She lay among the dozens of dead children, covered in their blood, sensing that she should not move. Only at night, after the murderers had left, did she return home. After this harrowing incident, her parents prepared a hiding place for her in their home.

The family was rounded up with the Jews of the area, but managed to escape. Halina hid with her grandfather in a nearby bakery. From their hiding place, she heard screams and shots. Anna bribed a German wagon driver, and the next morning she managed to smuggle Halina and her grandfather home.

On the eve of Passover 1943, the Warsaw Ghetto Uprising broke out. "We had a symbolic Seder night in a bunker in the ghetto, as the street next to us went up in flames," recalls Halina. A Polish youth named Jerzy Koźmiński was sneaking food into the ghetto through the sewers, and Halina's mother became friends with him. Jerzy bribed an SS officer, and he brought an elegant car to smuggle the family out of the ghetto.

The family members were taken out of the ghetto in pairs, in the trunk of the car. "During the escape and for many days after it, we saw huge, frightening flames from the burning ghetto," says Halina. Her mother and father were the last to leave, but were caught following a tip-off. Wolf managed to escape, but Anna was deported to Auschwitz, where she was murdered.

For some 18 months, Halina and her remaining family members were hidden in a camouflaged bunker at the home of Jerzy and his stepmother Teresa Koźmińska, later Ruth (Renia) Linder. In 1965, Jerzy and Teresa were recognized as Righteous Among the Nations.

During the Polish Uprising in Warsaw in the summer of 1944, the area was a battlefield and was constantly bombed. The Germans evacuated the entire area, including Teresa's family. Teresa sometimes snuck back to bring some food to the bunker occupants, but Halina and her family starved until the city was liberated in January 1945 by the Red Army.

In 1950, Halina immigrated to Israel. She volunteered for the Eran (Emotional First Aid) organization for 35 years, trained hundreds of volunteers in aid organizations, and led groups of disabled IDF soldiers.

Emanuel Ringelblum: The Man and the Historian
$24.00
Buy Now