Menachem Haberman lit one of six torches at the State Opening Ceremony of Holocaust Remembrance Day at Yad Vashem in 2019. 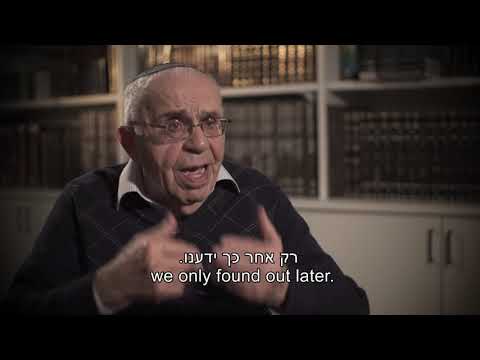 Menachem Haberman was born in 1927 in the city of Orlová, Czechoslovakia, but grew up in Munkács. He was the second of eight children. His Hasidic parents Yehuda-Laib and Rachel Haberman owned a dairy factory, and during his childhood, he helped deliver products to their customers.

Towards the end of 1938, Yehuda-Laib was drafted into the Czechoslovakian army and Menachem dropped out of school to take his place in the factory. Following the Munich conference, Munkács and its environs were annexed to Hungary. In the spring of 1940, Menachem's father was taken into the Hungarian army's labor service, and sent to the eastern front. On the eve of Menachem's bar mitzvah, Hungarian troops committed a pogrom near the synagogue, killing three worshippers.

In the spring of 1944, the Germans established a ghetto in Munkács. Twenty-one family members were cramped into a two-room apartment, where they experienced scarcity and hunger. Menachem and his friends were pressed into forced labor.

In May 1944, the Jews in the Munkács ghetto were deported to Auschwitz. During the selektion, Menachem was separated from his younger brother Benjamin, who was sent to the gas chambers with his mother and five of his siblings. His older sister later succumbed to illness, leaving Menachem as the last member of his family. He was put to work removing ashes from the crematoria, gathering excrement for fertilizer, and harvesting grains. Over time, he proved to be a skilled horse groomer, and he would carry equipment and horse feed around Auschwitz-Birkenau. Thanks to the food that he chanced upon along during his work, he managed to survive, although many times he was just a step away from death. He escaped the jaws of a dog that threatened to attack him; an SS officer nearly executed him after catching him with food in his bag; and he fell and nearly drowned in a pool of human ash from the crematoria.

In January 1945, Menachem was sent with the rest of the prisoners of Auschwitz on a death march, during which many of his friends died. The survivors were then put on open train cars and sent west. Airplanes bombed the convoy during the trip. Menachem was wounded and pulled a piece of shrapnel out of his own shoulder.

After a five-day journey, the train reached Buchenwald. Of the 150 prisoners who had been put in Menachem's car, 20 were still alive. Menachem stayed in the children's block in Buchenwald in dire conditions filled with disease and lice, overcrowding and hunger. When Buchenwald was evacuated early in April 1945, he hid in a sewage pipe. He was caught five days later and sent on a death march, but he ran away and returned to the camp. When the US Army liberated the camp the next day, Menachem weighed 34 kilograms (75 pounds).

After recuperating in Switzerland, Menachem founded a cooperative with his friends, buying equipment for a workshop for typewriters and adding machines. When he found out that his father had survived and was living in the Soviet Union, Yehuda-Laib wrote him, "If you go to Eretz Israel, there is a chance that we will meet.” Menachem immigrated to Israel in 1950, bringing the equipment with him and opening a workshop in Jerusalem. Eventually, he managed to get his father out of the USSR to Israel.

Menachem married Rivka, a Holocaust survivor from the Netherlands. They have three children and five grandchildren.