Moshe Ha-Elion lit one of six torches at the State Opening Ceremony of Holocaust Remembrance Day at Yad Vashem in 2017. 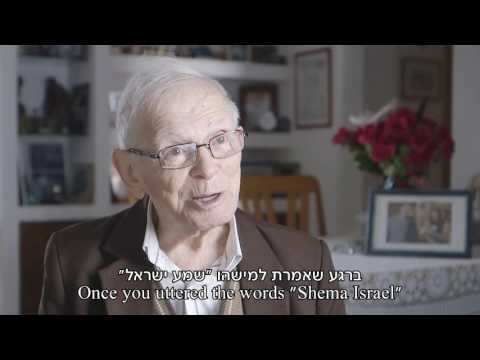 Moshe Ha-Elion was born in Thessaloniki, Greece in 1925 to Rachel and Eliahu.

A few days after the start of the German occupation in April 1941, Eliahu passed away. Moshe, Rachel and his sister Esther-Nina were deported to Auschwitz in cattle cars. While he performed various forms of labor and survived several selections, Moshe’s entire family was murdered in the death camp.

In October 1943, Thessaloniki native Jacob "Jakito" Maestro, who worked in the SS employment service, helped Moshe enroll as a trainee in the camp’s school for construction workers. In mid-1944, Binio Mijan, another friend from Thessaloniki, helped rescue him from penal labor after he was caught with a letter to a female prisoner. In January 1945, Moshe and Binio trudged together on the death march, helping each other until they reached Mauthausen. Moshe was later transferred to Melk and Ebensee.

On 6 May 1945, “Makeshift flags of the different countries of origin of the camp’s prisoners began to appear. There were more than 100 of us from Greece, Jews and Christians. Suddenly people burst into song, singing the Greek anthem,” recalls Moshe. “Then I ran into a prisoner who was shouting in Yiddish, ‘Jews, Jews!’ He pointed to a group of prisoners, which began slowly and devotedly to sing 'Hatikva.' I sang with them. There was no flag there. The lyrics were sung with Sephardic and Ashkenazic pronunciation, and not everyone sang, but the tune was almost uniform.”

Moshe set off for Greece, but while he was in Italy he decided to immigrate to Eretz Israel. In June 1946, he arrived aboard the Josiah Wedgwood. He was wounded during the War of Independence, and then served as a career soldier for 20 years before moving on to work in the security service. Moshe has dedicated his life to supporting needy Holocaust survivors, commemorating Greek Jewry and fighting Holocaust denial. For 15 years, he was Chairman of the Association of Survivors of Concentration Camps of Greek Origin Living in Israel. He was a member of the International Auschwitz Committee, the Yad Vashem Directorate, and the Foundation for the Benefit of Holocaust Victims in Israel. He is currently the acting Chair of the Centre of Organizations of Holocaust Survivors in Israel.

Moshe wrote his autobiography and three books of poetry. He also set one of them, written in memory of his younger sister Nina, to music. Moshe shares his testimony in Hebrew, Greek, Ladino, French and English, and joins military and school delegations on their visits to Poland.

Moshe and Hana z"l have a son and daughter, six grandchildren, and five great-grandchildren.