Chaim Grosbein lit one of six torches at the State Opening Ceremony of Holocaust Remembrance Day at Yad Vashem ⁣in 2016. 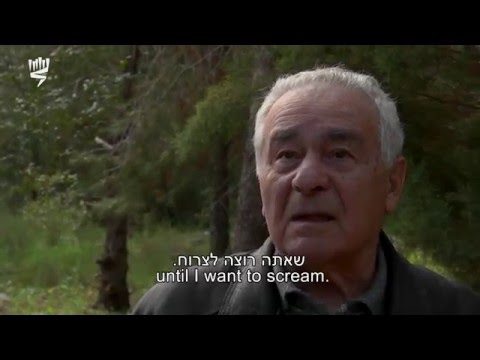 Chaim Grosbein was born in 1937 in Dołhinów, Poland (today Dauhinava, Belarus), to a religious family of four. His father owned a butcher shop and leased land.

In July 1941, the Germans occupied Dołhinów. In April 1942, the town's Jews were interned in a ghetto. When Chaim’s father and cousin left the ghetto with one of the forced labor groups, the Germans murdered them both. During an Aktion later that month, Chaim and his family hid in a pit under a stove. When the refuge was discovered, most of them were forced out and then shot or beaten to death. Chaim and his cousin Rishka were hiding in the corners of the pit, and went undetected.

A few days later, a relative came to persuade Chaim and Rishka to run away with him, but they refused. He was later shot to death.

One night, Chaim and Rishka left the pit and went to Rishka’s home in search of her mother, Lea. They found their aunt Dvosia, who took them to their neighbor, Gabriel Rubin. His home was on the edge of the ghetto, and during the next Aktion, they all escaped and headed for the woods, where they joined a group of Jews who had fled the nearby towns.

The partisans in the woods decided to send a group of Jews, including Chaim, behind enemy lines. During the long march, they were ambushed by the Germans and Chaim was shot in the leg. Dvosia carried him on her back, but ultimately she was forced to leave him behind. Russian partisans found Chaim and sent him to their infirmary, where a Jewish doctor operated on him without anesthesia. When the partisans abandoned the area, Chaim was left on his own. He slept in ditches in the ground, made a wooden spear for defense, learned to make fire, and hunted for food and water in the woods and nearby villages. When the opportunity arose, he took work herding cattle and performing other physical labor.

Two years later, Chaim reached a partisan camp and was sent to a Belarussian orphanage. He studied carpentry at a vocational boarding school and joined the Red Army. On furlough, he returned to Dołhinów, where he discovered that two of his aunts, including Dvosia, had survived.

In the early 1960s, Chaim immigrated to Israel. In 1965, he married Aliza; they have two children and five grandchildren.