Shimon Greenhouse lit one of six torches at the State Opening Ceremony of Holocaust Remembrance Day at Yad Vashem in 2009. 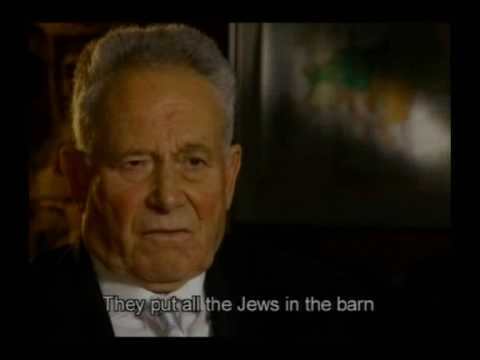 Shimon (Sjema) Greenhouse was born in 1932 in Krasna, Belarus, to a traditional Jewish Zionist family. His older siblings, Henya and Mendel, were active in Zionist federations and planned to emigrate to Mandatory Palestine.

At the end of 1941, after the Germans invaded the USSR, Shimon and his family were interned in the Krasna ghetto. Shimon and his mother managed to sneak out of the ghetto and reach a Polish acquaintance who gave them food and convinced an SS officer not to kill them.

One day, after a German horse fell into a pit, the Germans gathered Jews in the ghetto’s central square and shot them one by one. Shimon and his father, Yekutiel, stood there, their hands clasped. When Yekutiel was shot, he dragged his young son down with him. Shimon remained beneath his dead father, dazed and covered with blood, for a full day until family members pulled him out.

On Purim (March) 1943, the Germans liquidated the ghetto and murdered its residents, including Mendel and Henya. Shimon and his mother hid for five days with 20 other people. When they emerged, the ghetto was empty, and the air stank of incinerated bodies. As Shimon was recovering from typhus, his mother carried him on her back to the marshes, where the partisans were hiding. They survived the remainder of the war among the partisans, with minimal clothing and food.

After the war, Shimon and his mother returned to Krasna. In 1960, after Shimon completed his studies, they emigrated to Israel. Shimon married and had four children and three grandchildren. He served as an educator and high school principal in Petah Tikva, leaving his mark on generations of students.