Yisaschar Dov Goldstein lit one of six torches at the State Opening Ceremony of Holocaust Remembrance Day at Yad Vashem in 2018. 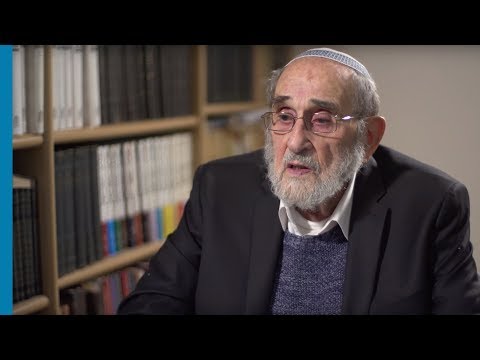 Yisaschar Dov Goldstein was born in 1929 in Bratislava, Slovakia, the third of five children. His father, Moshe Shraga, was the rabbi of the Jewish community, which suffered persecution by the antisemitic Slovakian regime. After Germany occupied Slovakia in the summer of 1944, Dov joined the underground "Working Group," and learned what was happening in Poland. Preparing for the worst, he built a wall in the storage room of his family home.

In the fall of 1944, Dov's mother Chaya Feige, his infant brother Eliezer and his 12-year-old sister Buna were deported to Auschwitz and murdered. Dov and his father hid in the storage room, but the Germans found them, too. They were taken to the Sered’ concentration camp and deported to Birkenau a week later, where Moshe Shraga was murdered on arrival. Dov was transferred to a factory in a satellite camp of Buchenwald.

Dov tried to observe Jewish practice every step of the way. On Hanukkah, the prisoners made a makeshift menorah, which gave off a strong aroma. The German commander came to check the source of the smell, but a bombing raid began and the commander ran out. During Passover 1945, a Jewish prisoner acquired a handful of flour from which they made a single piece of matzah. Every prisoner in the shack received a crumb from the matzah during the Seder.

As the Americans advanced, Dov was sent on a death march to Buchenwald. Two days after he arrived, the US Army liberated the camp. Dov had contracted typhus and was hospitalized in an infirmary, but he returned to Bratislava once he recuperated. When he arrived, he discovered that everything in his house had been stolen, except the holy books.

In August 1946, Dov boarded an illegal immigrant ship bound for Eretz Israel. After a seven-month incarceration by the British in Cyprus, and a month at the Atlit internment camp, he settled in northern Israel with a Bnei Akiva youth group. He was one of the first members of Kibbutz Ein Tzurim and fought in the War of Independence.

Dov established the Bnei Akiva yeshiva in Beer Sheva, taught Talmud and Bible for many years, and guided students and tourists around Israel. In the 1990s, he was the rabbi and kosher butcher in Košice, Slovakia. Dov continues tells his life story to young people and accompanies student trips to Poland.