Hannah Gofrit lit one of six torches at the State Opening Ceremony of Holocaust Remembrance Day at Yad Vashem in 2010. 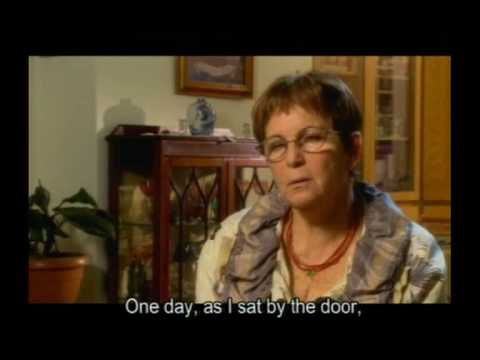 Hannah Gofrit- Rescue by Righteous Among the Nations in Warsaw, Poland

Hannah Gofrit was born in 1935 in the town of Biała Rawska, Poland, to Hershel and Zisel Hershkowitz. With the Nazi conquest, Hannah was forbidden from attending school, and her parents tutored her at home. Hannah’s family was allowed to live outside the ghetto established in the town, as her mother worked as a seamstress for the German forces. Hannah’s parents arranged to hide her with a Polish family, but Hannah refused, and joined them hiding in an underground potato shed.

At the end of 1942 the town’s Jews were deported to Treblinka. The family's neighbor, Mrs. Moshalkova, managed to obtain forged documents just for Hannah and her mother. Her father's fate remains unknown.

For two years, the women hid in the Warsaw apartment of the Skowroneks (later recognized as Righteous Among the Nations), helping their rescuers as much as possible. They were forbidden to look out the window or wear shoes, for fear of teir discovery. Hannah and her mother were saved during a Gestapo raid when one of the daughters hid them in the attic. On Christmas, when the Skowroneks had guests over, Hannah and her mother hid in a closet. Inside the dark closet, Hannah imagined herself flying into free, open spaces, like a butterfly.

After their documents were burned in the bombing of Warsaw, the women masqueraded as devout Polish Catholics. There were deported to the labor camp in Senftenberg near Leipzig, where they were employed in an AEG plant. As the Red Army approached, Hannah and her mother fled. They returned to their hometown, where they discovered they were the only survivors from their entire family. They left the following day for Lodz, where Zisel married Yosef Kupershmid, a Holocaust survivor whose wife and daughter had been murdered. A year later, Hannah’s brother Avraham was born.

In January 1949 Hannah emigrated to Israel, and settled in Tel Aviv. After attending nursing school, she worked as a public health nurse. For her devoted work, Hannah was awarded the Namir Labor Prize. She continued working as the chief nurse in Tel Aviv's Public Health Division until her retirement.

With the help of Naomi Morgenstern, Hannah wrote her memoirs, I Wanted to Fly Like a Butterfly. Translated into six languages, the book is read extensively in classrooms in Israel and abroad. Hannah corresponds and meets with its young readers from around the world.

Hannah is married to Yitzhak, is the mother of Ofer and has three grandchildren.