Thea Friedman lit one of six torches at the State Opening Ceremony of Holocaust Remembrance Day at Yad Vashem in 2018. 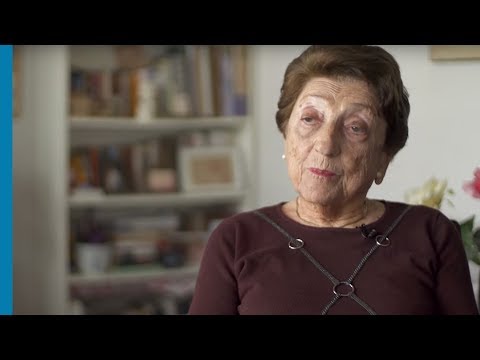 Dr. Thea Friedman was born in 1924 in Chernovitz, Romania, the only child of Yosef and Yetty Kwalenberg. In June 1941, the Germans bombed the city and Thea was sent to her relatives in a nearby village. German and Romanian soldiers reached the area and began harassing the residents. Thea and her aunt fled to a nearby thicket, and after the soldiers left, Thea returned to Chernovitz, passing many dead bodies along the road.

In September 1941, a ghetto was established in Chernovitz. Some 20 people were housed in Thea’s home. In November, her family was put in an overcrowded cattle car, with no food or water, and sent on a two-day journey to Atachi. Romanian soldiers plundered the deportees’ valuables. Thea’s family crossed the Dniester River and was deported to the Mogilev-Podolski ghetto. Yosef was taken to perform forced labor, while Thea worked clerical jobs for 150 grams of bread per day.

In December 1942, Thea fled the ghetto. She crossed the frozen Dniester on foot and went back to Chernovitz. She tried in vain to find refuge among relatives and acquaintances, and ultimately hid in the house of Prof. Kalman Gronich and his wife. When she was caught in a surprise search, she tried to commit suicide by swallowing pills, but her captors had her stomach pumped. She was eventually freed with the help of a bribe paid by the Jewish community.

Late in 1943, Thea met activists from the Gordonia youth movement, and acquired a forged passport. She reached Bucharest, where she met Yoseph, her future husband. After being arrested in a police raid, she was imprisoned, but she left the jailhouse daily to work in a hospital.

In July 1944, Thea was released from jail. Romania capitulated to the Red Army a month later. In 1945, she registered for medical school in Timișoara. In 1950, she married Yoseph and began practicing medicine. Their applications to leave for Israel were repeatedly turned down.

In 1958, Thea, Yoseph and their son finally immigrated to Israel. She began working as an ophthalmologist in the Haifa Bay area, and then in various hospitals in central Israel. She is an emeritus professor of the Faculty of Ophthalmology at Tel Aviv University (TAU). Yoseph helped lay the foundations of family medicine in Israel and taught at the TAU School of Medicine.

Thea and the late Yoseph have a son, who is also a physician, and five grandchildren.