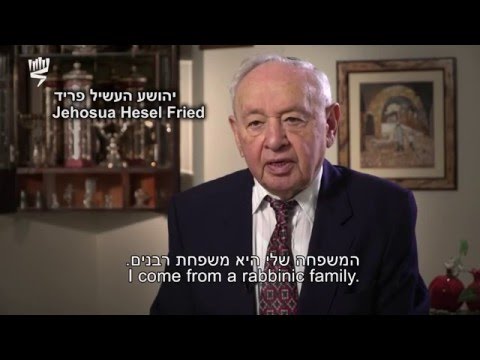 Jehosua Hesel Fried was born in 1930 in Velké Kapušany, Czechoslovakia, to a family of nine. His father was the community’s rabbi, the scion of a Hassidic rabbinical family.

In 1938, the region where Jehosua lived was annexed to Hungary. In April 1944, Hungarian police and Gestapo officers deported the Jews of the town to the Ungvar ghetto. In May, the ghetto’s Jews were deported to Auschwitz. Jehosua’s hair and sidecurls were shaved off, and he was put to work cleaning train cars, gathering victims’ possessions, and cleaning the ditches by the ramp. Jehosua and his friends found valuables in these ditches and sold them to Polish inmates for food.

One day, Jehosua saw his sister Rachel, who lived in the shack near his side of the fence, and tossed her some food. As the son of the community rabbi and cantor, Jehosua tried to sing traditional melodies to his friends and raise their spirits at every opportunity.

In December 1944, Jehosua and his friends were taken to the Sachsenhausen camp, and from there to Lieberhausen. As the Red Army drew nearer, they were sent on a death march. At night, they slept in the snow. They were eventually transported to Mauthausen, where they had to eat snails and frogs to survive. All through their travails, the group helped and encouraged each other at every opportunity. After they were transferred to Gunskirchen, Jehosua contracted typhus. In May 1945, while they were saying the Sabbath eve prayers, the US Army liberated the camp.

After recovering in Linz, Jehosua returned to Velké Kapušany, where he found his sisters: Rachel had survived Auschwitz, and Sosana and Ester had lived out the war in Budapest under false identities. Sadly, his mother, brother and sister had been murdered in the gas chambers at Auschwitz.

Jehosua studied at a yeshiva in Košice. When it relocated to the US, he decided to immigrate to Eretz Israel, where his sister Zipora lived. Jehosua, Rachel and Sosana traveled to Italy via Germany, and in March 1947, boarded the Moledet, bound for Israel. The British detained the ship and transferred its passengers to detention camps in Cyprus, where Jehosua studied Hebrew. In February 1948, Jehosua finally arrived in Israel.

In 1952, Jehosua married Rivka, whose uncle had been with him in the camps. Jehosua and Rivka have three children, 14 grandchildren, and 33 great-grandchildren.