Stella Franco Israel lit one of six torches at the State Opening Ceremony of Holocaust Remembrance Day at Yad Vashem in 2004. 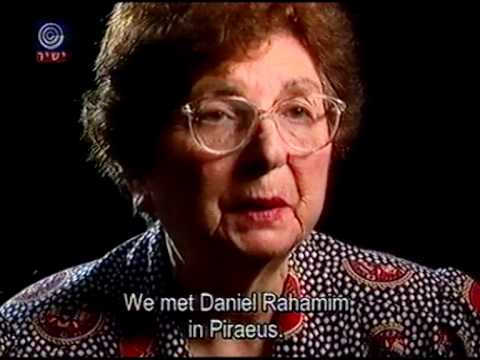 Stella Franco was born in Rhodes in 1926, the eldest of seven children. Until 1943, the country was far removed from the war, but in 1944 Rhodes began being bombed heavily. During Passover a bomb struck the family’s home, killing Stella’s mother and five siblings. Overcome by grief, Stella’s father moved the remnants of his family to a nearby Greek village, where they stayed for three months. In July the Germans entered the village and assembled the 2,000 Jews into a building. The day after Stella was incarcerated, they were loaded onto four freighters headed for Piraeus. One ship was sent to Kos, to collect the island’s 200 Jews. Another stopped in Leros and picked up Daniel Rahamim, the only Jew on the island (Daniel perished in the Holocaust, together with his family from Rhodes).

Nearly a month later, with no food and little water, they arrived in Auschwitz-Birkenau. Those who had survived immediately underwent a selektion — Stella’s father, who was young and relatively healthy, chose to go with his elderly parents and small daughter to their deaths, leaving Stella alone. Stella and the other young women from Rhodes who were admitted into the camp refused to believe their families had been destroyed, despite the smoke spiraling out of the crematoria.

In November, Stella was transported to the Wilstedt camp in Germany. There she met 32 young women from Rhodes, including her aunt, which slightly alleviated her suffering. Following bombings of the camp, the women were transferred to Theresienstadt. On 8 May, the Russian army arrived and was greeted with great joy. Stella stayed in the camp for a few more weeks to regain their strength before journeying on to Prague, and eventually settling in Bologna, Italy. Two years later, she succeeded in contacting one of two uncles who lived abroad. He flew her to his home in the Congo and warmly welcomed her into the family. Soon after she met Salvator Israel, originally from Rhodes, who had also lost his family in the Holocaust. They married and had two children, and after many happy years, immigrated to Israel. Today, Stella has four grandchildren.