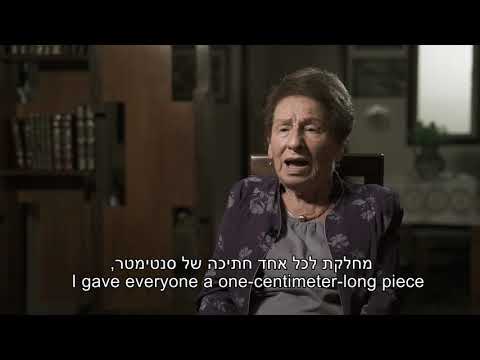 Sara Fishman (née Berkovich) was born in 1927 in Neresnice, in the Transcarpathia region of Czechoslovakia (today Neresnytsya, Ukraine), to a Hasidic family of ten .

In April 1944, tensions rose in the area, and ghettos began to be established. Sarah's father Gedalia David sent her and her two older sisters, Hinda and Rivka, to relatives in Budapest, Hungary, but they did not reach their destination. After a short ride, they were taken off the train and transported to the Halmi ghetto, where they were gathered at the local synagogue. The local rabbi shouted the prayer "Our Father and King" before the members of the community were put on trains and taken to the Nagyszőllős ghetto. Every year, during the recitation of the prayer "Our Father and King" during the Ten Days of Repentance, Sara emotionally recalls the rabbi's desperate entreaty .

Sara and her sisters were sent from Nagyszőllős to Auschwitz. After the selection, women with shaven heads were heard shouting across the fence: "Throw us what you have! A handkerchief! Soap! In any case, they will soon take everything!" One of the prisoners threw a stone at them, with a note attached. The note read that the smoke they saw from the chimney was their parents. Sara and her sisters thought they were crazy.

In Auschwitz, Sara and her sisters were reunited with their younger sister Pnina, but their sister Hinda fell ill and was taken to the infirmary barracks. By this time, Sara had been in Auschwitz long enough to realize that whoever was hospitalized there would not come out alive. Sara never saw Hinda again.

Sara worked cleaning the showers and clearing the valuables the Jews were forced to leave there before they were sent to the gas chambers. She underwent a selection, following which she was separated from her two sisters and sent by train to forced labor outside Auschwitz. One day, she rummaged through the bins in search of food, even though this risked the death penalty, and found a thin apple peel.

She distributed the peel to her ten friends. Each was given a very small piece, "to revive the soul for a moment," explained Sara. The next day she rummaged in the same bin again and found a thicker peel. Each day, the peel was thicker. One day Sara saw a woman peeking out of a nearby house window watching the inmates scavenging for the peels.

Sara was sent to a weapons factory located inside a salt mine in the town of Bendorf. She and her friends fell ill and bled constantly due to the subterranean working conditions. From there she was transferred to Bergen-Belsen, and after three months was placed in a packed wagon and transported for three weeks with no destination. Occasionally, the guards removed some of the women from the wagons, shots were heard, and the women did not return. Sara and the rest of the passengers were finally taken off the train in a wooded area. Their German guards disappeared, and the prisoners realized that they were free.

Sara was sent to Sweden for rehabilitation, where she remained for six months. She learned that two of her sisters had survived – the two who were with her in Auschwitz – and returned to Czechoslovakia. The three were the only survivors of their family.

In Czechoslovakia, Sara was trained to use weapons, and in early 1949 immigrated to Israel on an arms ship. She served in the IDF during the War of Independence. In Israel, Sara set up a successful knitting factory.

Sara has been telling her story for years to thousands of people, both in person and through online meetings.