Yehuda Feigin lit one of six torches at the State Opening Ceremony of Holocaust Remembrance Day at Yad Vashem in 2004. 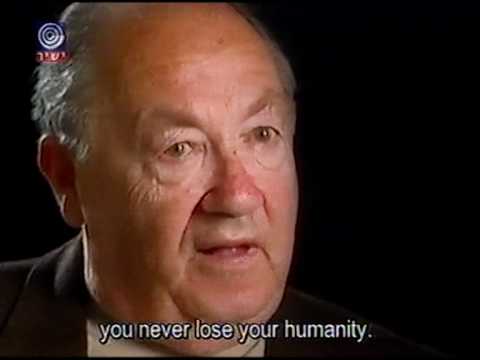 Yehuda Feigin was born in 1931 in Kovno, Lithuania, the youngest child to a Zionist family of four. In 1941 the Germans entered the city, and many Lithuanians joined in the rioting against the Jews. Within a few months, all the Jews were concentrated in the ghetto in Slobodka; the Feigins shared a four-roomed house with three other families. Yehuda helped support his family by cultivating a small vegetable garden in the courtyard, gathering wood and selling candies.

The many aktions in the ghetto diminished the number of its residents, including much of Yehuda’s extended family. During the children’s aktion, Yehuda and his mother hid in the basement. The following day, still fearing for his son’s life, Yehuda’s father asked the food distributor to hide Yehuda underneath the canvas in his truck. Yehuda returned to the ghetto the next day.

In July 1944 the ghetto was liquidated and the remaining residents were loaded onto trains.  The women and children disembarked at Stutthof, but Yehuda chose to stay with his father and the train continued to Landsberg. After a week, the 131 children of Kovno were separated from their families and sent to Auschwitz, where they were used as “human horses” hitched to wagons carrying items from place to place. The children formed a cohesive group and gave each other vital support.

During the selektions on the eve of Rosh Hashana and Yom Kippur in September 1944, some 90 children were sent for extermination, including the youngest — an eight-year-old boy — who tried in vain to exchange his portion of bread for his life. After Auschwitz was destroyed the remaining children were marched 50 kilometers to the train station, and sent to Mauthausen. During the journey the train was bombed, killing a number of passengers. After two months, they were transferred to a tent encampment and then on to Gunskirchen, where they lay in the mud under pouring rain, without shelter or food. Many people died, but the children of Kovno managed to survive until their liberation in May 1945.

After the war the Feigin family reunited, and in 1948 made aliyah. Yehuda married an Israeli-born woman, Aviva, in 1955, and today the couple has three sons and three grandchildren.