Eliezer Eizenschmidt lit one of six torches at the State Opening Ceremony of Holocaust Remembrance Day at Yad Vashem in 2013. 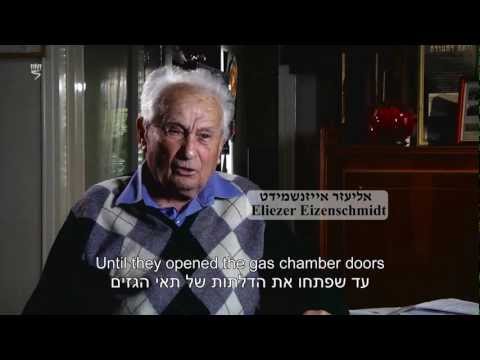 Eliezer Eizenschmidt was born in 1920 in Luna, Belarus, the eldest of three children to Joshua and Esther.

In June 1941, the Germans occupied Luna, and in November, they established a ghetto in the city. In November 1942, the Germans began to transfer the Jews from the ghetto to the Kielbasin camp. In December, they were taken to a train station and deported to Auschwitz. All of Eliezer's family members were selected for murder except him and his brother Abraham. Five weeks later, Abraham was also killed.

Eliezer was assigned to a Sonderkommando group, where he worked in horror for six months, removing corpses from the gas chambers and transferring them to cremation pits.  One night, the men of the Sonderkommando held a Pesach seder. They obtained a little white flour, and in secrecy baked matzah on an oven. Everyone received a tiny piece of matzah.

In Eliezer’s room, the Sonderkommando men built hand grenades from cans of preserved meat into which they placed gunpowder in preparation for revolt. They also sharpened knives they found among the belongings of newly arrived Hungarian Jews, turning them into weapons. In October 1944, a group of Sonderkommando workers rebelled; all of its participants were killed. The Germans began a thorough investigation among all of the surviving Sonderkommando men, among them Eliezer. Despite having been at the very heart of the preparations, he revealed nothing – though his hair turned white overnight.

On 18 January 1945 Eliezer was sent on a death march heading for Germany. He escaped from the convoy before it even left Polish territory, but was shot and injured. Covering up his bloody footprints with snow, he hid in the fields. When he was discovered by Ukrainians, he posed as a Belorussian and escaped. He eventually arrived at the house of Teodor and Franciszka Tendera, who hid him until liberation. (In 1970, Yad Vashem recognized the couple as Righteous Among the Nations.)

In September 1945, Eliezer married Judith, also a Holocaust survivor. In June 1946, the couple immigrated to Eretz Israel. After detention at Atlit, they settled in the south and then in Givatayim. Eliezer became a blacksmith, and continues to work at a factory.

Eliezer accompanies missions to Poland as a witness, and performs in the "Testimony Theater" in Givatayim that facilitates dialogue between Holocaust survivors and Israeli youth.