Bela Eizenman lit one of six torches at the State Opening Ceremony of Holocaust Remembrance Day at Yad Vashem in 2019. 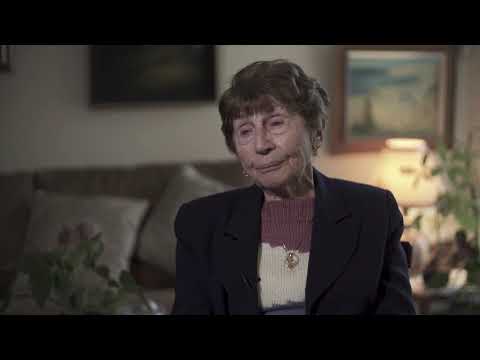 Bela Eizenman was born in 1927 in Lodz, Poland, to Moshe and Hinda Federman. When the Germans occupied Poland in September 1939, the goods in her father's shop were requisitioned. A year later, the family was imprisoned in the Lodz ghetto. Thirteen people were crowded into their ghetto home. In May 1942, Moshe was interrogated at the German police headquarters, across from their house. Bela could hear his screams. Moshe succumbed to his injuries a few days later, and was buried in a mass grave.

Bela was put to work sewing and crocheting — including uniforms for German soldiers — filling her mother's quota as well so that they could get more ration cards. In March 1943, German troops broke into Bela's home and beat her eldest brother Chaim, who was lying down and visibly starving. When Bela and Hinda came back from work, they found him dying. "Tomorrow is the first day of spring, but I won't live to see it," he said. He died the next day.

Despite their work sewing uniforms, in the summer of 1944, Bela and Hinda were deported to Auschwitz. While on the ramp, Hinda told Bela to wear her coat so that she would look older. Hinda was murdered in the gas chambers. Bela, the last surviving member of her family, became sick and was destined for the gas chambers too, but a train to Bergen-Belsen was missing a female prisoner and Bela was sent in her place.

After reaching Hanover, Bela was carried to Bergen-Belsen by several women. She worked in a factory in Rochlitz, and in March 1945, she was sent on a death march with other prisoners. The women survived on snow and frozen potatoes. One night, Bela and three of her friends hid in the hay in a barn. The Germans poked the hay with their bayonets, but did not discover them. When the column of the death march vanished, they fled to the forest, getting caught in a snowstorm. Bela ultimately reached a Czech village, where she was liberated by the US Army.

Bela joined a group of Jewish orphans who sought to immigrate to Eretz Israel with the help of the "Youth Aliya" movement – thus fulfilling her late brother's dream. During Bela's journey to Eretz Israel she stayed in refugee camps in Italy, where she learned Hebrew. She also met Zvi Eizenman, also a Holocaust survivor, and they later married.

In August 1946, Bela and Zvi boarded the illegal immigrant ship Katriel Yaffe. The British seized the ship and took its passengers into custody in Cyprus and Atlit for six months. In Israel, Bela completed her schooling, studied nursing, and later joined the IDF as a registered nurse. She served as head nurse in a hospital and later in the public health service.