Edith Drori lit one of six torches at the State Opening Ceremony of Holocaust Remembrance Day at Yad Vashem ⁣in 2003. 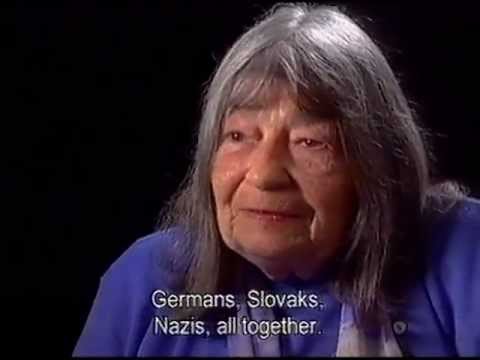 Edith Drori née Ernst was born in 1920 in Dunaharaszti, Hungary, one of four children. When she was four years old, the family moved to Slovakia and a year later her father died. Before the war, two of Edith’s siblings moved to Israel through a hachshara program with Ha Shomer Ha-Tza’ir youth movement and in 1941, when Germany invaded the Soviet Union, Edith’s oldest brother was sent to a labor camp.

Following rumors that women would also be sent for forced labor, Edith’s “leftist” friends convinced her to join the anti-Nazi underground. Soon after, she left her mother and fled to a nearby village. After a while, she considered applying for a housekeeping vacancy so her mother could join her in shared accommodations. To her horror however, she found her mother had been sent to her death.

Despairing, she resolved to turn herself in to the Slovakian police, but a chance meeting with a former acquaintance altered her plans. Instead, she set off to a village in the Sitno Mountains, were she joined a small underground cell of five people. The group’s main pursuit was to print an underground newsletter – calling for an end to the persecution of Jews - and distribute it to villages and schools. Over time, the group expanded to about 30 members, but disbanded due to internal conflicts.

Edith’s faction left the bunker, and on 9 September 1944, joined the Slovakian revolt. Edith moved to the Brigade to Free the Slavs, and served as a liaison between the Slovakian popular front and the underground. She handled supplies and provisions, volunteered for special assignments, and was the only female among 200 fighters.

After about two months, the Germans suppressed the revolt. The rebels suffered many losses, and those who survived retreated to the forests to fight as partisans. Edith reunited with her first underground group, and escaped from the Germans by crossing a frozen river. They hid in the forest, suffering from cold and mosquitoes, and Edith became increasingly ill. By the time the Russians arrived to liberate the region, Edith had contracted severe malaria. She spent a month in a military hospital  in Romania and was then sent to Transylvania to recuperate, returning to Slovakia once she had recovered.

At the end of the war, Edith was awarded the Red Star Medal of High Merit and a medal as a heroine of the Slovakian people.

In July 1948, Edith arrived in Israel and in 1952 married Shlomo Drori. They moved to Moshav Magshimim and adopted a daughter, Nili. In 1979, they settled in Haifa.