Vera (Miriam) Dotan lit one of six torches at the State Opening Ceremony of Holocaust Remembrance Day at Yad Vashem in 2004. 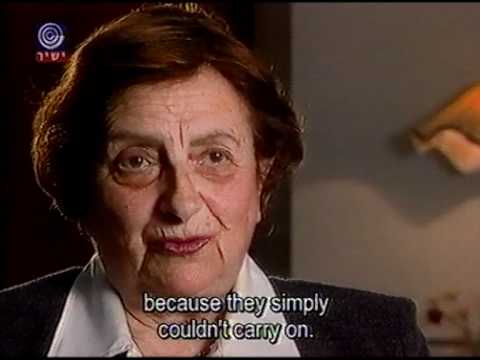 Vera (Miriam) Dotan was born in 1931 to a family of four in  Budapest, Hungary. When the Germans invaded in 1944, her happy and culture-rich life completely changed, and within a month all the Jews were sent to a ghetto where they lived in intolerable conditions.

In July they were taken on a three-day journey, without food or water, to Auschwitz. Upon arrival, Vera and her mother were separated from her father and brother, and Vera was sent off with the other children. Desperate to rejoin her mother, Vera seized the first opportunity to escape from the group and look for her mother, but she was caught by the warden of the women’s camp, beaten, and returned to the children’s quarters.  Later that day she fled the children’s group again. This time she found her mother, and the two managed to stay together.

After three months of selections and labor, they were sent to work at Wohldorf, an air base near Frankfurt. After Wohldorf was evacuated, they were transported to Ravensbrueck. When Vera’s mother was sent to work in the Siemens factory, Vera ran after her. Fortunately, the group was one worker short, and Vera was allowed to join.

At the end of April 1945, Ravensbrueck was evacuated and the prisoners were marched away. They walked under constant allied bombardment, and any stragglers were shot. In the confusion, eight women—including Vera and her mother—ran to hide in a nearby stable. When the stable caught fire, they escaped to a ditch, only to find three SS soldiers lying there. The soldiers tried to use them as human shields, but again they managed to flee, and Vera and her mother slowly made their way towards Berlin, from where they traveled to Prague and then back to Ujpest. When they arrived home, they were heartbroken to discover that Vera’s father had been murdered and cremated the day he arrived at Auschwitz and her brother had died just a few weeks before liberation.

After the war, Vera married a friend of her brother’s, and in 1949 they moved to Israel, followed a year later by her mother. Today they have two sons and five grandchildren.