Bat-Sheva Dagan lit one of six torches at the State Opening Ceremony of Holocaust Remembrance Day at Yad Vashem in 2012. 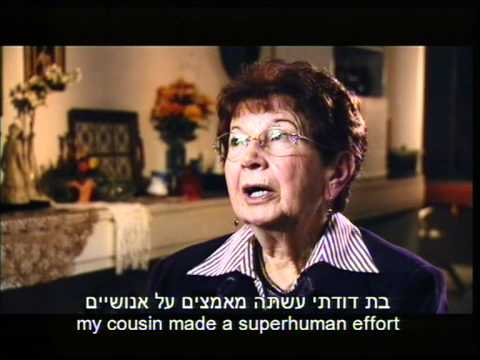 Bat-Sheva Dagan was born in 1925 to a traditional Zionist family living in Lodz, Poland. Her father, Szlomo-Fiszel Rubinsztajn, owned a weaving workshop, and her mother, Fajga, was a seamstress. Bat-Sheva had five brothers and three sisters. One of her brothers, Cwi (Zvi) immigrated to Eretz Israel before the war.

When war broke out, Bat-Sheva's four other brothers and her eldest sister fled to the USSR. The other family members moved to Radom, settling in the area that became known as the "Great Ghetto" in April 1941. There was also a "small ghetto"; Jews were prohibited to leave either of them. Bat-Sheva joined a youth study group that met secretly.

Using "Arian" documents, Bat-Sheva was sent to the Warsaw ghetto by Shmuel Breslaw, a Shomer Hatzair instructor. She brought the underground newspaper Against the Flow back to Radom.

In August 1942, Bat-Sheva and her youngest sister, Sabina, were transferred to the small ghetto. Their parents and older sister were sent to Treblinka, where they were murdered. Bat-Sheva and Sabina decided to flee to Germany – separately, in order not to arise suspicion – but Sabina was shot and killed while trying to leave the ghetto. Arriving in the city of Schwerin, Bat-Sheva used some false documents to work as a maid for a Nazi family. When her ruse was discovered, she was arrested and moved from one prison to another. In May 1943, Bat-Sheva was sent to Auschwitz-Birkenau, and put to forced labor in the hospital – emptying latrine buckets and determining the death of patients by measuring their temperature with the touch of her hand – and at the "Canada" commando sorting the clothes of victims. In January 1945, she was sent on a death march to Ravensbrück and Malchow.

On 2 May 1945, Bat-Sheva was liberated by the Allies, and went to Belgium. In Brussels, she met her future husband, a soldier in the British Army, who gave her a visa to Eretz Israel, where she went to live with her brother Cwi.

In 1958, her husband passed away. Bat-Sheva raised their two sons, completed her academic studies and worked in preschool education. She also traveled abroad as a Jewish Agency emissary.

Bat-Sheva is a pioneer in the field of Holocaust teaching for young children. She wrote children's books, as well as a book of documentary poetry for adolescents and adults, which describes her experiences during the Holocaust. Bat-Sheva also tells her life story to IDF soldiers and schools in Israel and abroad.