Reuven Dafni lit one of six torches at the State Opening Ceremony of Holocaust Remembrance Day at Yad Vashem ⁣in 2003. 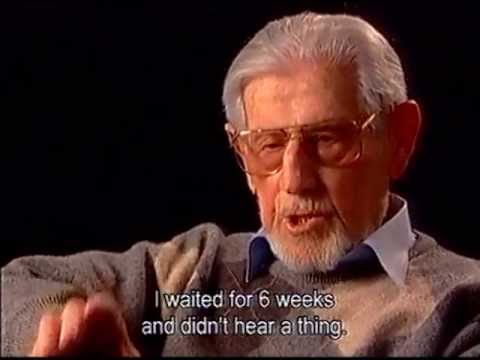 Reuven Dafni was born in 1913 in Zagreb, Yugoslavia to a family of three children. When he was 14 years old, the family moved to Vienna, Austria. In Austria, Dafni first experienced antisemitism, which reinforced his commitment to Zionism. He began attending a Jewish school and studied Hebrew in preparation to make aliyah.

In 1936, Reuven moved to Palestine on his own and was among the founders of Kibbutz Ein-Gev. In January 1940, he was drafted into the British Army and was entrusted with establishing a Yugoslavian Brigade, which was to handle contact with the partisans in occupied Europe.

Around the same time, Reuven met the “Israeli” group that was supposed to parachute behind enemy lines to rescue Jews and bring them to Palestine. He was accepted to their unit and Like Hannah Szenes and her comrades, he was sent to the paratroopers’ school in Ramat David. After a short training period, Dafni was sent to Cairo, and then to Bari, Italy.

Upon landing, the partisans who awaited them led them to a village. After marching for several days they reached the headquarters of the partisans, and Reuven and Hannah Szenes met General Roseman, who sent them to the Croatian partisans. They walked for 12 days under close accompaniment to the Croatian area, and remained there for about three months. During that time two other Jews from Ha Shomer Ha-Tza’ir movement joined them — a French soldier and a young Christian woman who switched identities with Hannah Szenes.

On 9 June 1944, Hannah Szenes and three young men crossed the border into Hungary. Hannah had arranged with Reuven that he would wait for her for three weeks at the exit point, and if she had not arrived by then, he was to assume she had been captured. Reuven waited for six weeks, during which time he remained in Yugoslavia helping dozens of Jews escape with aid from the partisans. Then he received word from headquarters in Palestine that Hannah Szenes had been captured. She was tortured, sentenced, and then executed on 7 November 1944.

Following her murder, Dafni returned to Cairo to join the Jewish Brigade. Thanks to a fortuitous meeting in Bari, Italy with one of his brothers (who was serving in the American army) he learned about the fate of his family: his father and older brother had survived. After staying at a refugee camp in Italy they came to Palestine. Reuven followed them soon after, discovering upon his return that his mother had been killed in 1941.

Reuven returned to Kibbutz Ein-Gev and later worked in the diplomatic service with Israel’s Foreign Ministry. Between 1982-1995 he served as Deputy Chairman of the Yad Vashem Directorate. Reuven has two children and two grandchildren, and presently lives with his partner, Na’avah, in Jerusalem.