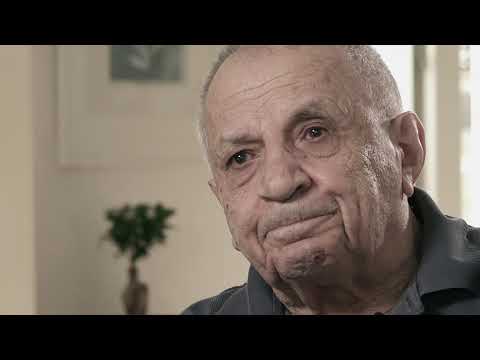 Yossi Chen was born in 1936 in the town of Łachwa, Poland (now Lakhva, Belarus), the eldest son of Dov Berl and Chaya Sara Chinitz. In July 1941, the Germans occupied Łachwa and on Passover eve 1942, all the town's Jews were ordered to move into the ghetto. Many of the ghetto's inmates, including Yossi's grandmother, died of starvation, overcrowding and epidemics.

In August 1942, the Jews in the ghetto learned of the liquidation of nearby ghettos and the use of ghetto laborers to dig pits near the town. Rumors circulated that the ghetto residents were about to be murdered. Earlier, the ghetto youths had organized an underground, with the knowledge and support of the Judenrat [ghetto Jewish council].

When the ghetto inhabitants were rounded up to be taken for execution, an uprising broke out during which the Judenrat called on the ghetto Jews to flee to the forests. This was one of the only uprisings in the history of the Holocaust carried out by the young people of the community in full cooperation with the Judenrat. The majority of the thousand Jews who tried to flee were shot and killed. Amid the tumult of the shooting and the inferno, six-year-old Yossi fled to the forests. "Thanks to that revolt, I am alive today," says Yossi.

Yossi's mother and younger brother Moshe were caught and murdered. Yossi became separated from his father and escaped alone into the swamps. After about an hour, he found his uncle, Hersh Leib. The next day, the two found Dov Berl. They forced their way through the swamps in an attempt to reach the partisans. Suddenly they heard a shot, and Hersh Leib let go of Yossi's hand. It was the worst moment Yossi remembers: His uncle had been murdered by a Pole who ambushed the fugitives in order to rob them.

Yossi and his father hid in haystacks, swamps and forests, drank water from pits and swamps and ate berries until they found the partisans and joined them.

At the end of 1943, the Germans and their aides launched a manhunt for the partisans. Yossi and Dov Berl moved around on foot and in sledges in the forests of Belarus, hungry and frozen. They improvised shoes from cowhide straps, and garments from pieces of coarse cloth. When Yossi fell ill, he was put on a sledge, wrapped in rags and piles of snow to keep his body warm, and given spoons of soup until he recovered.

When he was strong enough, Yossi was instructed to obtain food from the farmers in the area. He excelled in navigating and orienting himself in the forests, and even helped older people reach their destinations. Several times he encountered the Germans, but always managed to escape. "We were like cockroaches running away from place to place," remembers Yossi.

In July 1944, Yossi and Dov Berl were liberated by the Red Army. They moved west to the DP camps. In July 1947, the two boarded the Exodus illegal immigrant ship, but the British detained the ship and the passengers were rerouted to Europe and forcibly unloaded at the port of Hamburg in Germany. In August 1948, Yossi and Dov Berl immigrated to Israel.

Yossi was a senior commander in the IDF's intelligence unit and worked for the Mossad. He wrote a study on the activities of the Mossad in pursuing Nazi War Criminals, of which only a part was allowed to be published.

Yossi and Nechama have three daughters and nine grandchildren.