Avraham Carmi lit one of six torches at the State Opening Ceremony of Holocaust Remembrance Day at Yad Vashem in 2020. 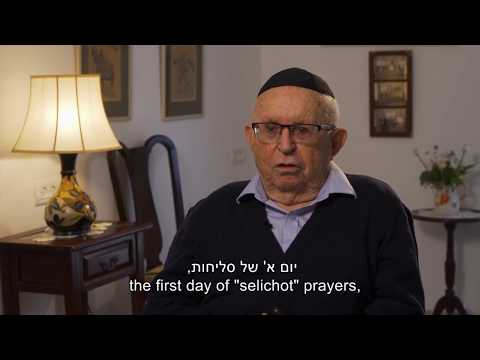 Avraham Carmi was born in Krzeszowice, Poland in 1928, the only child of Bezalel and Lea Stolbach. After the German invasion, his family fled to his uncle Moshe Posner, who managed the Warsaw Jewish cemetery. Posner’s home had been destroyed in the bombings, and he let them and other families stay in a structure in the cemetery. Avraham got used to living in the cemetery, which had 30-40 funerals a day, and would play with the workers’ children. He celebrated his Bar Mitzvah in the cemetery’s synagogue with a meal of beets and potatoes prepared by his mother.

Avraham helped Lea to build the ghetto walls in order to meet the quota for a food ration card.

In the summer of 1942, while the deportations from Warsaw to the extermination camps were underway, the Germans came to search the cemetery. Everyone living there ran to hide in a bunker, but Avraham and his mother didn’t make it. They were taken, along with other cemetery workers, to the Umschlagplatz, the departure point for deportations. The Germans discovered Avraham’s relatives hiding in the cemetery, and shot them.

Moshe Gelbkrin, the cemetery watchman, was given permission to leave the Umschlagplatz in order to take care of burials. He took Lea, who pretended she was his wife, and smuggled Avraham out in a backpack. Avraham’s father was deported to Treblinka and murdered.

When they reached the cemetery, they buried the family members who had been murdered there during the Aktion. During the Warsaw Ghetto Uprising in the spring of 1943, the Germans discovered their bunker and took the people hiding there to the Umschlagplatz. Avraham, his mother and his uncle Moshe Posner were sent to Majdanek, where Lea was murdered.

In September 1945, Avraham immigrated to Eretz Israel. He fought to defend the Etzion Bloc during the War of Independence, and was taken prisoner by the Jordanians. After his release, Avraham worked in the Mikveh Israel Agricultural School and was an inspector in the Education Ministry. Avraham has given testimony and traveled to the camps in Poland numerous times.

Avraham and Rivka, who survived Bergen-Belsen, have three children, nine grandchildren and 23 great-grandchildren.