Ester Burstein (Lipscyz) lit one of six torches at the State Opening Ceremony of Holocaust Remembrance Day at Yad Vashem in 2006. 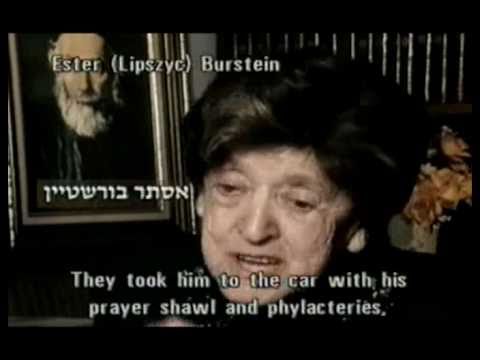 Born in Lodz in 1923, Ester came from a long line of rabbis on her mother’s side. Her father, too, was a rabbi. Ester had two younger sisters.

In September 1939, the Germans came to the family’s home and plundered its valuables. A week later, Esther’s grandfather was ordered to appear at the German headquarters and provide them with the number of Jews living in the town.

When the family were moved to the ghetto in March 1940, Ester smuggled in a copy of the Prophets and Writings, written on parchment, hidden inside a baby’s pram. She and her sisters worked in a handicrafts factory, and their father served as a rabbi. In September 1942, Ester’s father was deported and killed in the Chelmno death camp. Her mother died in the ghetto a year later, leaving Ester responsible for four young girls (her two sisters and two cousins). In 1944, they were sent to Auschwitz. After surviving several selections, they were taken out of the prison block and placed near the crematorium, with the instructions: “Either a train will come to take you to work, or you’ll be sent to the crematorium.” A day and a half later, they were deported to Christianstadt, a labor camp south of Berlin. Every morning, they marched seven kilometers to dig ditches for a water line.

In January 1945, the girls were marched to Bergen-Belsen. They caught typhus, and her cousin died. Esther herself became very ill, and her friend, Erika Pakua, risked her life to get her half a cup of milk. Erika did not drink one drop from the cup. Ester remembers that acts of mutual aid like this were very common. Her sister, Channah died just after liberation. Esther weighed 27 kg when she was liberated.

Although the doctors gave her no chance of surviving, Esther managed to recover. She left for Israel with her sister, Mina, in 1946, aboard an illegal immigrant ship. The ship was caught and sent to Cyprus.

In 1948, Esther finally arrived in Israel. She settled in Haifa and studied accounting. She married in 1952, and moved to Bnai Brak. Esther has six children, and many grandchildren and great-grandchildren.