Manya Brodeski-Titelman lit one of six torches at the State Opening Ceremony of Holocaust Remembrance Day at Yad Vashem in 2007. 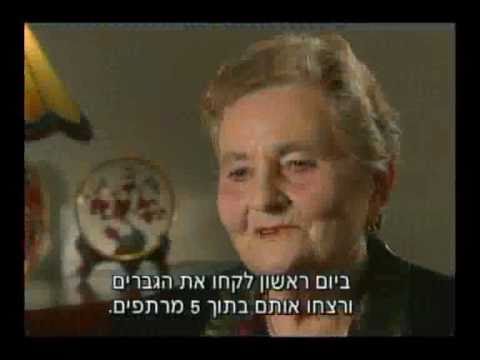 Manya Brodeski-Titelman was an only child, born in 1932 in Zhabokrich, in the Ukraine.

In July 1941, the German army entered the town, followed by the Romanian army. The Jews were ordered to gather in five cellars where the Romanian soldiers proceeded to shoot them. Manya lost consciousness. When she awoke, she saw that her mother had been killed. Her father had survived.

Manya and her father hid in the cellar until nightfall. They then escaped to the forest but after a week, starving and cold, they returned. A few days later, they were herded into the town ghetto, where they lived under grueling conditions in one apartment with several other families.

One day, the police ordered both adults and children back to the cellars to remove the bodies of those killed in the massacre. The bodies were in a terrible state of decomposition, and the horrified prisoners were forced to bury them in a mass grave. Manya identified her mother’s body by the red boots she had been wearing. She and her father managed to bury her in a grave near their house.

During this period, thousands of Jews from Bessarabia were being herded to the nearby River Bug, where they were murdered. Manya’s father would throw boiled potatoes to them across the ghetto fence, and even bring survivors to their home.

Towards the end of the war, the Romanians gathered all the Jews in the main square of the town, planning to kill them. Suddenly, a group of German soldiers arrived and warned the Romanians that the Russian army had arrived. The Romanians fled. To the Jews’ astonishment, the German soldiers turned out to be partisans in disguise.

In 1980, Manya and her family immigrated to Israel. In 2003, she was among a group that erected a memorial tombstone on the site of her town’s mass grave.

In March 2007, Manya’s husband Boris, a Holocaust survivor and soldier in the Red Army, passed away. She has two daughters, five grandchildren and one great-grandchild.