Chasia Bornstein (Bielicka) lit one of six torches at the State Opening Ceremony of Holocaust Remembrance Day at Yad Vashem in 2006. 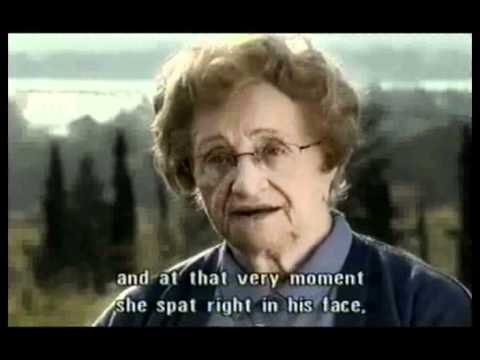 Chasia was born in 1921 in Grodno, Poland, to a traditional family. When she was 12, she joined the Hashomer Hatza’ir youth movement, later becoming a leader.

In June 1941, Chasia enlisted with the Grodno Underground. When the ghetto was established in November, she kept the youth occupied, preventing them from roaming the streets with nothing to do. She read them stories and talked about emigrating to Israel, thus planting hope and strength in the hearts of her young charges. At the same time, the underground helped the numerous refugees arriving from Western Poland. Chasia was also part of the attempts to organize a ghetto uprising.

As part of her underground activities, Chasia was sent to Bialystock, where she worked on the “Aryan” side under the alias of a young Polish woman – Helena Stasziwak. With the failure of the uprising in Bialystok, she joined another of her comrades as a courier for the partisan brigade hiding in the forests. During the day, she worked as “Helena” for the family of an SS officer, and at night she smuggled weapons, armaments, food and medicines, and gathered intelligence for the partisans. Together with other couriers, she also organized a cell of Germans who helped the partisans. Thanks to a map of Bialystok Chasia prepared for the Red Army Command, the city was captured without losses. For this, she and her fellow couriers were awarded the highest commendation given to civilians.

At the end of the war, Chasia opened the first orphanage for Jewish children in Lodz. For the next 18 months, she wandered through Germany and France with the children. In 1947, she boarded the ship “Theodore Herzl” with more than 500 children in her charge. The ship was caught by the British and sent to Cyprus, where Chasia continued to run educational activities in the youth camp. After six months, the group managed to reach Israel. To this day, she maintains warm relationships with many of the group’s members.

Chasia married and made her home on Kibbutz Lehavot Habashan. She worked as an educator and an art teacher at Tel Hai College. She has three daughters, 11 grandchildren and two great-grandchildren.