Shmuel Bogler lit one of six torches at the State Opening Ceremony of Holocaust Remembrance Day at Yad Vashem in 2018. 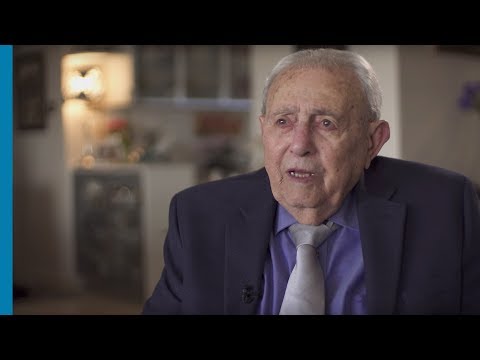 Shmuel Bogler was born in Bodrogkeresztúr, Hungary, in 1929, the youngest of Mordehai and Rajzel Bogler’s ten children. One of Shmuel's sisters died as a young girl. Mordehai was a merchant, and Shmuel helped the family make a living.

In 1941, Mordehai was imprisoned for 18 months due to an antisemitic libel. Three of Shmuel’s brothers were forced into labor battalions. One of them was murdered in Buchenwald; the other two survived in captivity by the Red Army.

In March 1944, Germany invaded Hungary, and in the spring, immediately after Passover, the village’s Jews were deported to the Sátoraljaújhely ghetto. Shmuel and his family were taken from the ghetto to Auschwitz. His parents and three cousins were sent immediately to the gas chambers. Shmuel and his brother Chaim were sent to a labor camp near Breslau, where there were hundreds of Polish Jews. Most of the Hungarian Jews in the camp did not know Yiddish, and Shmuel and Chaim, who spoke Yiddish, became the groups’ interpreters.

On 31 January 1945, the two brothers were sent on a death march to Buchenwald, where the US Army liberated them. They returned to their village two months later, where they discovered that two of their siblings had survived, too. Another two had emigrated from Europe before the war. In May 1947, Shmuel boarded an illegal immigrant ship bound for Eretz Israel. After detention by the British in Cyprus, he eventually arrived in October 1947.

Shmuel joined the Palmach’s Religious Platoon. In December 1947, he left Tel Aviv for Jerusalem with a convoy of provisions. He fought to defend the Etzion bloc, and when the bloc fell in May 1948, he was taken prisoner by the Jordanian Legion. Shmuel joined the POW camp’s police force in Transjordan and became the second-in-command. He was responsible for distributing food and water, as well as roll calls in the camp. He studied history, geography and mathematics and played volleyball.

In April 1949, after nearly a year in captivity, Shmuel was freed and joined the Israel Police. He became an officer and worked in high-ranking capacities, including as the Southern District Deputy Commander.

Since retiring, Shmuel has worked in various public capacities, such as road accident prevention, and gives testimony on a regular basis. He volunteers in Yad Vashem’s Righteous Among the Nations Department, translating testimonies from Hungarian to Hebrew.

Shmuel and Shoshana have a son, a daughter, five granddaughters and three great-grandchildren.