Aviva Blum-Wachs lit one of six torches at the State Opening Ceremony of Holocaust Remembrance Day at Yad Vashem in 2020. 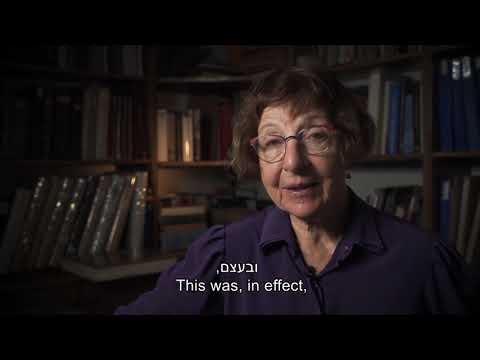 Aviva Blum-Wachs was born in Warsaw in 1932 to Abraham (Abrasha) and Luba Blum née Bielicka. Abrasha was a leader of the Bund, the Jewish socialist workers’ party, and Luba was the deputy director of a nursing school. Aviva and her little brother Olek received their education from their Christian maid, spoke fluent Polish and knew the Christian rites. This helped them survive the war.

When the Germans invaded Poland in September 1939, their home was damaged and caught fire. Aviva, her mother and her brother ran to a relative’s home.  A few days later, her father, who was not home during the shelling, found his family. Luba and her children moved into the staff residence in the nursing school.

When the Warsaw ghetto was established in October 1940, Luba secured a building for the nursing school. Sometimes Aviva and Olek attended activities in the orphanage of Janusz Korczak, but Aviva was reluctant to walk in the street, since the Germans would shoot people at random for no reason.

During the Great Deportation of the summer of 1942, the residents of the nursing school were marched to the Umschlagplatz, the departure point for deportations to the death camps. Luba managed to convince the Germans that the nurses were essential to the efforts to deal with the epidemics in the ghetto. The Germans let the nurses go, and Luba smuggled Aviva and Olek out in a vehicle used to carry corpses away from the Umschlagplatz.

In the Aktion of January 1943, the Germans barged into the hospital at 33 Gęsia Street and shot hundreds of patients, physicians and nurses. Luba had received a few minutes’ warning from the underground resistance, and managed to hide several of the nurses and patients, as well as her children, in the basement. Luba decided to smuggle her children out of the ghetto; first Olek, and several weeks later Aviva, who hid among a group of Jews who worked outside the ghetto. She went to Aurelia Borkowska, a poor and isolated laundress, who found a family that hid Aviva for two months. After an informer revealed her place of refuge, Aviva was moved between a few hideouts for several months.

Luba escaped the ghetto by posing as a Pole. She went to Aviva’s hideout and told her that her father, who participated in the Warsaw Ghetto Uprising, had been arrested by the Gestapo and murdered. Luba and Aviva left Warsaw. With the aid of false papers claiming she was the widow of a Polish officer, Luba found work on a Polish estate. In the spring of 1944, Polish partisans attacked the estate, killed the owners and burned it down. Luba and Aviva fled back to Warsaw, where they survived until liberation under Polish identities. Olek also survived under a false identity, with Borkowska's extended family.

In the summer of 1944, Luba and Aviva were liberated by the Red Army. Aviva immigrated to Israel in 1950. Aviva is an artist who presents her paintings in exhibitions. She has a daughter, four grandchildren and ten great-grandchildren.