Itzchak Biran lit one of six torches at the State Opening Ceremony of Holocaust Remembrance Day at Yad Vashem in 2014. 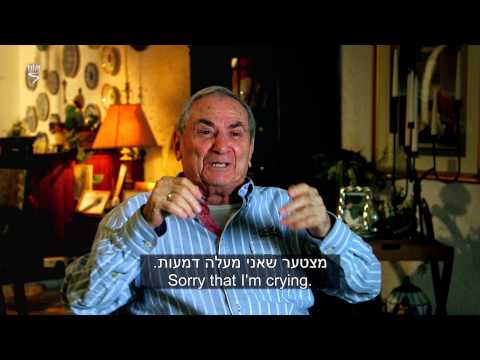 Itzchak Biran (Birnbaum) was born in 1935 in the Romanian village of Drăcineț. His mother, Clara Held, and his father, Beniamin Birnbaum, divorced around the time of Itzchak's birth. In June 1941, Itzchak was staying with his uncle, Zelick Held, in the town of Bobivtsi. The night after the Soviet troops retreated, the locals murdered all of the Jews in the village, among them Itzchak's aunt Etel. Itzchak and Zelick hid in the corn fields near their house. The next day, Zelick was also captured and murdered.

As Itzchak was being deported by cart to Transnistria, he ran away in Czernowitz and made his way to his mother's house. In late 1941, Itzchak and Clara were deported to the Mogilev-Podolsk ghetto near the Dniester River, where Itzchak fell ill with typhoid fever. Clara nursed him to recovery, but contracted typhus herself and died in January 1942. Itzchak joined up with a group of Jews hiding in the forests, and helped them by stealing food and goods from the villagers, as well as from factories and trucks loaded with sugar beets. He was sometimes caught and punished by Ukrainian policemen.

In 1944, Itzchak was sent by train to Botoșani, Romania, and placed in an orphanage. Later, he was adopted by a Soviet artillery battalion. When the soldiers were ordered to turn him away, Itzchak made his way to Czernowitz and found his father Beniamin, whom he had never met before, as well as his half-sister, Tova (Gita), born in 1941.

In late 1945, the family moved to the city of Bytom, Poland, where Itzchak joined the Dror youth movement and received a strong Zionist education. After attempting to immigrate to Israel in 1947 on the famous Exodus ship with peers from the Dror youth movement, Itzchak eventually arrived in April 1948. He was sent to Afula and then to Kibbutz Ein Harod, where he was integrated among children born at the kibbutz.

In 1953, Itzchak joined the IDF. He became a pilot in the Israeli Air Force, commanded a squadron during the Six Day War, and took part in numerous secret missions. After retiring from the IDF, Itzchak worked as a pilot and aircraft inspector for El Al. In 2000, he went on his last flight – to Warsaw and back: "For me, this was a kind of closure." In recent years, Itzchak has been working for a new project entitled "From Survival to the Skies," aimed at collecting testimonies from IAF veterans who are Holocaust survivors, and integrating their life stories in the teaching curriculum at the Air Force Academy.

Itzchak and Zlila Biran have three daughters, five grandchildren and one great-granddaughter.