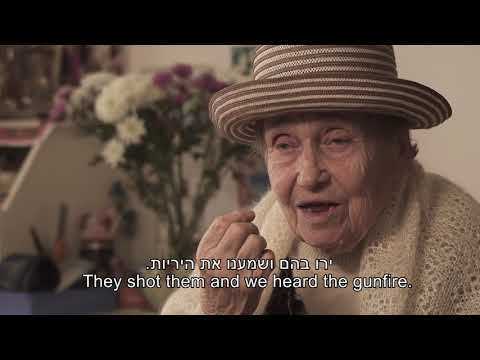 Manya Bigunov was born in 1927 in the Ukrainian city of Teplyk, the youngest of Nahum and Frima's three children.

In June 1941, immediately after their invasion of the Soviet Union, the Germans began shooting hundreds of thousands of Jews at hundreds of murder sites. In July, the Germans occupied Teplyk, and sent residents from the city to forced labor, including Manya and her mother. On 27 May 1942, the Germans rounded up some of the camp workers, including Manya and her mother, and began loading them onto trucks. After Frima was placed on a truck, one of the Germans slammed Manya against a wall and she lost consciousness, remaining motionless on the ground. The trucks drove to the nearby forest, where all the Jews on the trucks were unloaded and shot to death, including Frima.

After she regained consciousness, Manya was transferred to different labor camps. She escaped from one of the camps with her friend Esther, and they returned to Teplyk. There Manya found her father among a group of Jewish professionals who were being held by the Germans for work purposes. The group paid a local man to lead Manya and her friend to the Bershad ghetto in Transnistria, where they arrived in September 1942. In the ghetto, they had to cope with harsh living conditions, hunger and cold. In the winter, Manya fell ill with typhus. In 1943, Nahum came to the ghetto, but died of illness in February 1944, three weeks before the area was liberated by the Red Army.

Following liberation, Manya returned to Teplyk, where she was reunited with her brother and sister. Manya married Naftoli Bigun, who served in the Red Army and survived in POW camps by concealing his Jewish identity. When Naftoli returned from captivity, he was imprisoned by the Soviets, former prisoners being considered traitors by the Soviet regime. It was not until 1954, after Stalin's death, that Naftoli was released, but he died in 1961 at the age of 39. Manya worked as a nurse in a hospital, raising her daughter Edit alone.

After the war, Manya worked tirelessly to preserve the memory of the Jews of Teplyk who were murdered in the Holocaust. She immediately began to write about the experiences of her Jewish community. She described every house where Jews lived before the war, and wrote down the names and stories of all the Jewish occupants of each house, and if they survived, their experiences after the war. The information, including a diagram of the town, was transferred to the Yad Vashem Archives. Manya filled dozens of Pages of Testimony commemorating the people of Teplyk. She wrote articles about her community, and published them in the Russian press. She was also active in a group that erected a monument to the Jews of Teplyk and held memorial ceremonies there.

In 1992, Manya immigrated to Israel with her daughter and two granddaughters. Manya Bigunov has told her story to thousands of schoolchildren, students and teachers.

The Holocaust in the Crimea and the North Caucasus by Kiril Feferman
$43.50
Buy Now