Fanny Ben-Ami lit one of six torches at the State Opening Ceremony of Holocaust Remembrance Day at Yad Vashem in 2019. 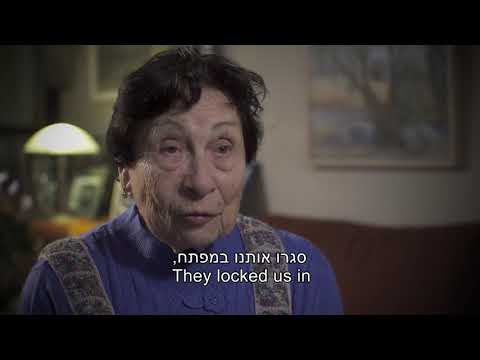 Fanny Ben-Ami was born in 1930 in Baden-Baden, Germany, to Hirsch and Yohanna-Hannah Eyal. When Hitler rose to power, her family fled to Paris. The couple had two other daughters, Erica and Georgette, and five-year-old Fanny babysat her little sisters when her parents went out to work.

When WWII broke out in September 1939, Hirsch was imprisoned. Following the German occupation in May 1940, Fanny and her sisters were sent to the Château de Chaumont with the help of the OSE, an organization that rendered aid to Jewish children. Fanny served as a maternal figure to her little sisters, as well as to other children in the home.

In July 1942, the children in the orphanage were scattered due to an informant. In the spring of 1943, Fanny went to Lyon to visit her mother, and found out that she had been imprisoned. Fanny went to the jailhouse and told the wardens, "Let my mother out. She didn't steal anything or murder anyone. There's no reason for her to be here." The jailers threatened to imprison her too, but Fanny answered, "Do it, my parents are in jail anyway. You're not real Frenchmen, you're traitors. You know what happens to traitors!" The jailers were amazed at her courage and released her mother.

The OSE transferred Fanny and her aunt to the Alps, where Fanny began to aid the resistance. After eavesdropping on a local businessman's phone call, she warned them about a raid the Germans were planning.

When the OSE decided to smuggle Fanny and a group of children into Switzerland, her mother took her to the bus and said, "Who knows if we'll see each other again?" They never did. A seventeen-year-old was leading the group of children. When the group got close to the border zone, the teenager panicked at the massive German presence in the area and refused to go on. For lack of an alternative, Fanny took command and smuggled the children in a postal train to Annemasse. From there, they tried to reach the border in trucks, but they were caught by French gendarmes on patrol. The children were interrogated and imprisoned, but Fanny managed to get them out through a bathroom window. Once outside, Fanny ordered the children to march while singing, as if they were on vacation, so as not to draw suspicion. The group escaped to the forest and Fanny managed to smuggle them into Switzerland.

After the war, Fanny found out that her parents had been murdered, and returned to France with her sisters. When she petitioned the municipality for French citizenship, Fanny met a resistance fighter whom she knew. "Fanny saved 150 people," he told the officials. "She will not pay for citizenship. She will receive it with honor." Fanny was awarded the French Legion of Honor for her work in the resistance, but she declined to accept it.

Fanny immigrated to Israel in 1956. She and her husband Benyamin z"l have two children and six grandchildren.