Yehuda Beilis lit one of six torches at the State Opening Ceremony of Holocaust Remembrance Day at Yad Vashem in 2020. 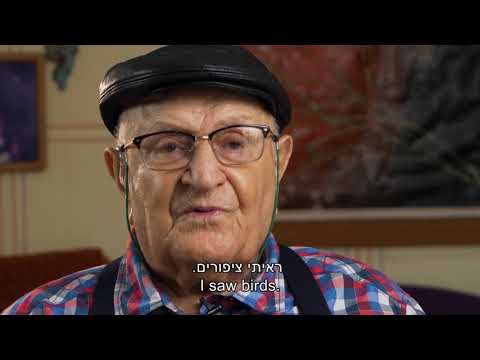 Yehuda Beilis was born in Kovno, Lithuania in 1927, the youngest of Eliezer and Chana’s three sons. The Germans occupied Lithuania in 1941, while Yehuda was living in the resort town of Palanga. He was imprisoned in a synagogue with other Jewish teenagers, where they suffered abuse.

In October 1941, Yehuda's family was sent to the Kovno ghetto. A few days later, they were taken with thousands of other Jews to the Ninth Fort, the site of the mass murder of Kovno Jewry.

Yehuda was pushed to the edge of a pit. He heard shots, and the murdered Jews fell into the pit bringing him down with them. When he regained consciousness, he found himself in pitch blackness at the bottom of the pit. He made his way out through the bodies, and ran away. He reached a forest home and begged for help. The residents tended his wounds, fed him and gave him clothes but, fearing for their lives, they asked him keep their deeds secret. Back inside the ghetto, Yehuda told the remaining Jews what had happened to him, but they could not believe him.

One day he got word of an Aktion. Remembering that his uncle had given him an address in case of emergency, he fled his work outside of the ghetto and went to the place, which turned out to be a restaurant. The owner gave Yehuda a place to hide, and helped him adopt a false identity. In the restaurant Yehuda met Gene Jonusiene-Premeneckaite, who hid him in her family’s house in the village for a year-and-a-half.

After the daring prisoner escape from the Ninth Fort in late 1943, the Germans stepped up the search for Jews who were in hiding. On his brother's advice, Yehuda returned to the ghetto.

In March 1944, hundreds of children in the ghetto were abducted and murdered by the Germans. A few parents managed to hide their children, and the Judenrat sought to smuggle them outside the ghetto. They asked Yehuda to petition his friend, Father Stanislovas Jokubauskis, for help. Yehuda slipped out of the ghetto and found the priest, who agreed.

The plan entailed giving Yehuda a sack with a sleeping child inside, as well as money and cigarettes. He would leave the ghetto with the sack, bribe the SS guards, and go to the rendezvous point with the nuns sent by Father Jokubauskis. They would take the child to a hideout. In all, Yehuda smuggled 22 children out of the ghetto.

Father Jokubauskis and Gene Jonusiene-Premeneckaite were later recognized as Righteous Among the Nations.

In the summer of 1944, upon the liquidation of the Kovno ghetto, Yehuda and his brother Yosef were sent to Dachau and put to work in the Kaufering labor camp. Yosef didn't survive, and Yehuda was left alone in the world.

In 1946, Yehuda immigrated to Eretz Israel. He joined the IDF and fought in the War of Independence. He regularly gave testimony about his experiences during the Holocaust. He and his wife Ahuva have two daughters, four grandchildren and five great-grandchildren.