Ovadia Baruch lit one of six torches at the State Opening Ceremony of Holocaust Remembrance Day in 2002. 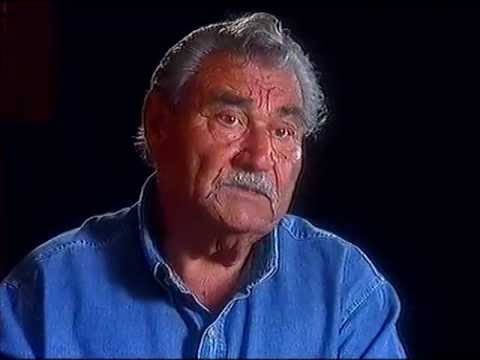 Ovadia Baruch was born in Salonika in 1922 to a family of eight children. They lived in the Jewish neighborhood of Baron Hirsch, and he and his sisters studied at a Hebrew school.

In June 1942 Hitler’s racial laws were applied to the Greek Jews and their neighborhood became a ghetto. On 15 March 1943, the ghetto residents were ordered to buy one-way train tickets to an unknown destination, and the following morning they were loaded onto cattle cars, 100 per compartment, without food, water, or amenities.

Seven days later they arrived at their destination. The doors were flung open, and search lights were thrust into their faces. SS soldiers awaited the passengers shouting, whipping them, and throwing them onto the platform. In the confusion, Ovadia lost his family members and never saw them again. Initially — due to the language barrier and the uniforms worn by the inmates — the Salonika Jews thought they had been taken to a mental asylum, not Auschwitz.

Following their arrival, Ovadia was among a group of young Greek men who passed Mengale’s selection and were taken to Auschwitz I. They were immediately sent to work, but not knowing German, they had difficulty understanding instructions and were constantly beaten.

Due to the hard labor, harsh conditions, and constant torture, only five of the group survived, and it was decided that they should be murdered. However a young, German-speaking Greek prisoner, Ya'akov Maestro, saved them, insisting that their professional skills could be utilized. The lie was quickly exposed and Ovadia was beaten.

During one of his most terrible beatings — having been caught stealing food — Ovadia screamed out in his mother-tongue - Ladino: “Ho, Madre,” (Oh, Mother). A young prisoner from Salonika, Aliza Tzarfati, heard his screams and recognized the language. Ovadia fell in love with the beautiful young woman and for the next three months they exchanged notes. In his final note Ovadia wrote: “If by chance we are released, we will marry.”

In January 1945 Ovadia was sent on a death march to Germany via Dachau, Mauthausen, Gusen I, Gusen II, and Melk, and on 5 May 1945 he was liberated by two American soldiers who brought him to a hospital. On his recovery, Ovadia was taken to Mauthausen and placed with other Greek former prisoners, and in the summer of 1945 he returned to Greece.

Ovadia’s family’s house in Salonika had been bombed, so he set up temporary home in the synagogue with other survivors. As other Jews began to return to the city, lists of survivors were compiled and posted, and he was overjoyed to locate Aliza’s name. Ovadia wished to marry Aliza immediately, but she was unsure, as in Auschwitz she had been subjected to medical experiments, which had left her sterile. However Ovadia was not dissuaded, and he agreed to Aliza’s condition that they immigrate to Israel. Soon after, they married and immigrated illegally to Palestine in a fishing boat.

They settled in Hod Hasharon and after some time — to their surprise — Aliza conceived. The Jewish doctor who had operated on her in Auschwitz had mercifully left her with one ovary — an act that had cost him his life. Aliza gave birth to a boy, and after some time, a girl.