Iudit Barnea and Lia Huber lit one of six torches at the State Opening Ceremony of Holocaust Remembrance Day at Yad Vashem ⁣in 2009. 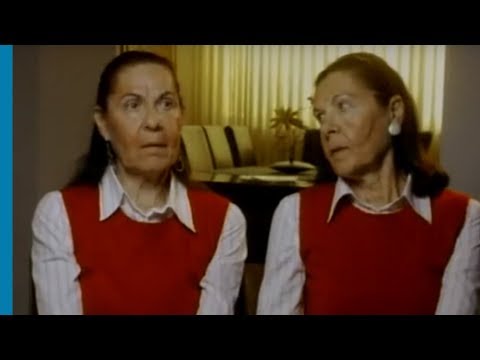 Identical twin sisters Iudit Barnea and Lia Huber (nées Tchengar) were born in 1937 in the town of Şimleul Silvaniei (Szilagysomlyo), Transylvania. In 1940, Transylvania was annexed to Hungary, and in June 1942 their father Zvi was taken to a forced labor unit on the Russian front.

With the German conquest of Hungary in March 1944, the family’s property and belongings were confiscated, and they were forced to wear a yellow star. In May 1944 Iudit, Lia and their mother, Miriam-Rachel, were interned in a ghetto, and the following month they were deported to Auschwitz, along with many other members of their family.

At Auschwitz, Iudit and Lia suffered the infamous medical experiments of Josef Mengele. The twins always stayed close together. Every night, their mother would sneak into their block and give them her meager portion of bread. She would also take them outside, in all weathers, to wash them and comb their hair, and thus preventing them from getting infested by lice and being doomed to the gas chambers. One day, as Mengele was experimenting on the girls, Miriam-Rachel burst into the shack and begged him to stop. In response, she was injected with a concoction that nearly killed her, and caused her permanent deafness.

In January 1945 the girls and their mother were liberated by the Red Army. They returned to Şimleul Silvaniei, and in August 1945 they were reunited with their father, who had survived many camps. In 1960 the family immigrated to Israel. Both girls married: Lia and her husband Jean have two children and seven grandchildren; Iudit and Moshe have three children and five grandchildren.