Kalman Bar On lit one of six torches at the State Opening Ceremony of Holocaust Remembrance Day at Yad Vashem in 2006. 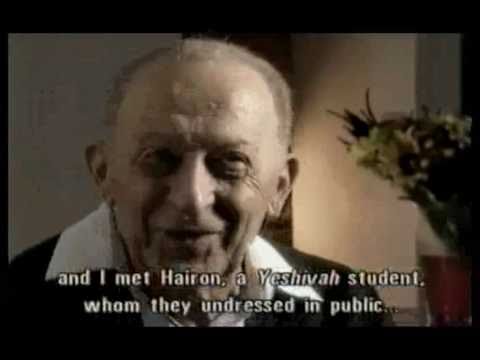 Kalman Bar On - Arrival and Survival in Auschwitz

Born in May 1930, in Ilok, northern Yugoslavia, to an Orthodox family, Kalman had 4 siblings, one of them a twin sister. His father and two of his brothers died of illnesses when he was a child.

In 1943, Kalman was sent to study in a yeshiva. Two years later, he returned to his family in the ghetto. In June 1944, he was deported with his family to Auschwitz-Birkenau. On the railway platform, his mother heard shouts: “Zwillinger-raus!” (Twins-out!). Holding both their hands, she pulled Kalman and his sister out of the line. By the time the three could figure out what was going on, everyone else had disappeared – Kalman’s grandfather, cousins and their families. They never saw them again.

Kalman was separated from the others and taken to the “Twins Block.” There he met a dwarf by the name of Leush Peled, who was also his distant relative. Their familial relationship and shared plight bonded the two together, and they looked out for each other from then on.

Kalman was put to work in the guardroom. This posting provided him with opportunities to hide precious food scraps, which he shared with his cousin Leush. He was subjected to medical experiments, receiving numerous injections. In July 1944, Kalman learnt that his mother and sister had been transferred to the barracks next to his. He began to throw food to them over the fence.

One day, a party was held for SS soldiers in the guardroom. Kalman was placed against a wall and shots were fired between his legs and hands and near his head. Suddenly someone shouted: “What are you doing? He belongs to Mengele!” The shooting practice ended abruptly and Kalman was released.

During the death marches, Kalman hid for a week under a bunk, until he was liberated on 27 January 1945 by the Red Army. He wandered alone for months until he found his sister. His mother had died before the liberation.

Kalman arrived in Israel in 1947. After his discharge from the IDF he went to work for El Al, where he served as chief quality control officer and later as head of the Australia and New Zealand offices. Kalman is married and has twin sons and one grandson.