Asher Aud lit one of six torches at the State Opening Ceremony of Holocaust Remembrance Day at Yad Vashem in 2014. 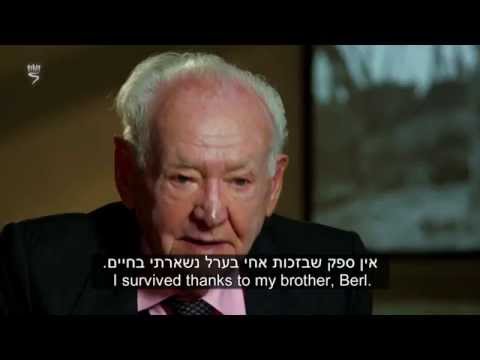 Asher Aud was born in 1928 in Zduńska Wola, Poland as Anshel Sieradzki, to Shmuel Hirsh Sieradzki, a tailor, and his wife Jocheved. Asher had an older brother, Berl, and a younger brother, Gabriel.

In the spring of 1940, a ghetto was established in the town and Asher's family was ordered to move there.  At first, Jews were allowed to go outside the ghetto for two hours every day, but in September the ghetto was fenced and sealed. The Germans carried out a number of aktionen in the ghetto; in one of these, Shmuel and Berl were taken away.

In August 1942, the ghetto was liquidated and the remaining Jews sent to the Jewish cemetery; some were murdered en route, including many babies. The Germans held the Jews at the cemetery for two days without food or water. Asher stayed close to his mother and brother. The Jews were forced to walk between two rows of German soldiers who took turns beating them. At the end of the row, the stronger ones were separated from those who were weaker. "Instinctively, I told my mother, 'Here is where we part,'" Asher recalls. The 14-year-old was directed to a group set to work at the Lodz ghetto. Jocheved and Gabriel were deported to Chelmno and murdered.

In Lodz, Asher foraged for food in garbage heaps and worked at a factory making straw shoes. He fell ill with typhus but recovered.

In August 1944, the Lodz ghetto was liquidated and Asher was deported to Auschwitz. After "selection" and "disinfection," Asher found his brother Berl, who helped him procure food. Berl and his friends helped Asher survive two aktionen, and he was put to work dissembling airplanes and cars.

In January 1945, Asher was sent on a death march. He survived Mauthausen and Gunskirchen. After liberation, he reached Italy with the assistance of the Jewish Brigade.

In November 1945, Asher immigrated to Israel. He studied at an agricultural school, joined the Haganah, and took part in the War of Independence. After being discharged, he moved to Jerusalem and began working for Israel Military Industries. Asher is now retired, but volunteers within various frameworks assisting Holocaust survivors.

Following his visit to Poland in 1993, Asher became involved in commemorating the destroyed Jewish community of Zduńska Wola. At the unveiling ceremony of a monument in their memory, he told his life story for the first time. He now shares his experiences with educational groups, students and soldiers. To date, he has accompanied dozens of youth and IDF groups traveling to Poland.

Asher and Chaya Aud have three children and 13 grandchildren.