Zohar Arnon lit one of six torches at the State Opening Ceremony of Holocaust Remembrance Day at Yad Vashem in 2020. 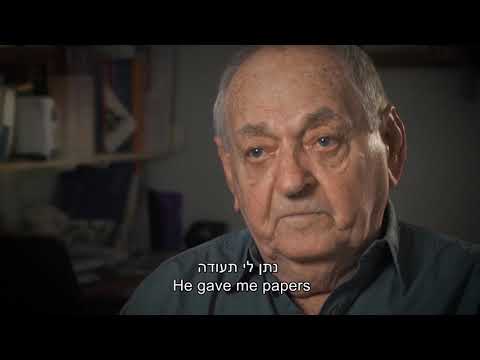 Zohar Arnon was born in Kisvárda, Hungary in 1928 the middle child of Bina and Aaron’s five children. He attended a cheder, but at the age of ten he joined Hashomer Hatzair and became a Zionist. When he was 15, he went to Budapest to learn a trade.

On 19 March 1944, the Nazis occupied Budapest. In June, Zohar went to live with a friend in a house designated for Jews. He relied on his “Aryan” appearance and walked about without wearing the compulsory Star of David badge. However, when looking for work, he was rejected every time his Jewish origin was discovered.

Zohar went to the offices of the Jewish community of Budapest to figure out what happened to his family members who had stayed in Kisvárda. There he met Efra Agmon, his group leader from Hashomer Hatzair. Agmon told him that he had been in Kisvárda and told the young people to escape, but they refused because they believed that the penalty for running away would be the murder of their entire families. Agmon asked Zohar, “Are you ready to go on a journey that will end in Eretz Israel?” Zohar responded in the affirmative, and Agmon gave him dollar bills and instructions to wait across from the train station the next evening. Zohar arrived there at the specified time, but he did not see Agmon. Suddenly a man wearing the uniform of a Hungarian train police officer approached him. Zohar recoiled, but the officer grabbed him and asked, “Don’t you recognize me? It’s me, Efra.”

Agmon was a member of the underground Zionist movement in Budapest, which provided thousands of young Jews with false papers and smuggled them into Romania. He gave Zohar false papers, and instructions to buy a ticket to Nagyvárad, near the Romanian border. During the train ride, two gendarmes boarded the train. Zohar feigned a stomachache and went to the bathroom. When he emerged, he was wearing the clothing of a Hungarian youth group. The gendarmes questioned him, and then left him alone.

In Nagyvárad, Zohar approached – according to his instructions – a man with a Tyrolean hat. It was Moshe Alpan, another operative in the smuggling network. Only then did Zohar find out that nine other Jewish teenagers had been on the train with him. Alpan told the ten of them to spread out in the city in pairs to avoid suspicion, and to return in the evening.

When they came back, Alpan assigned them a smuggler. He took them to an old woman, who put them up in her barn. The next evening, they were smuggled on foot through the fields, walking all night and crossing the border into Romania at dawn.

Zohar traveled through Romania, Bulgaria, Greece, Turkey, Syria and Lebanon. In January 1945, he finally arrived Eretz Israel. His parents and two of his sisters were murdered in the Holocaust.

Zohar fought in the War of Independence and eventually became a forest ranger, a producer and a director. Zohar and his wife Ahuva have two daughters.