Haim Arbiv lit one of six torches at the State Opening Ceremony of Holocaust Remembrance Day at Yad Vashem in 2020. 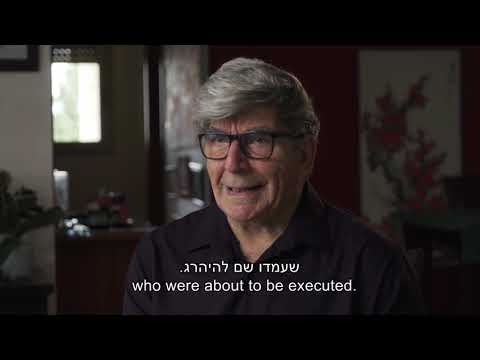 Haim Arbiv was born in Benghazi, Libya in 1934, which was under Italian rule. The traditional family of nine lived in a mixed neighborhood of Arabs, Jews and Italians. At the end of 1940 the British launched an attack on Cyrenaica, the region that included Benghazi, and held it for several months until the Germans pushed them back out and reinstated the Italians. During the battles, Haim and his mother fled the city to seek shelter from the bombings.

After the Italians regained power, the treatment of Jews worsened since the authorities and the local Italian residents considered the Jews collaborators with the enemy. Jews in Benghazi were arrested and forbidden from engaging in commerce, and much Jewish property was confiscated.

In 1942, Haim's family was deported to the Giado concentration camp, 1,200 kilometers away from Benghazi. Before the horrific journey, his parents managed to hide gold coins inside loaves of bread, suitcases and belts, hoping it would help them survive. In Giado, every family received a small amount of living space inside a shack, with only bedsheets separating them. The food at the camp consisted mostly of meager, moldy bread. Hundreds of Jews died of hunger, fatigue and disease in Giado, among them Haim’s newborn niece. Haim's immediate family avoided starvation thanks to his elder brother and sister, who bought bread from local Bedouins in exchange for the gold coins they had smuggled from home. This trade was very risky, because the guards would shoot whoever approached the camp fences.

In late 1942, Haim learned that the Jewish men in the camp were being concentrated to be murdered. A distraught Haim ran to find his father, but the execution had been called off.

After their liberation by the British army in 1943, the family returned to Benghazi. They rebuilt their destroyed home, and Haim attended a Hebrew-language school set up by soldiers from the Jewish Brigade. His connection to Eretz Israel grew stronger.

Late in 1947, as the fighting between Jews and Arabs in Eretz Israel intensified, Jews began suffering harassment in Libya. Haim’s grandfather was murdered by rioters. The family’s home was attacked, but an Arab neighbor fired a pistol to disperse the rioters and took Haim’s family into his home until tempers cooled.

In 1949, Haim and his family went to Tripoli and boarded a ship to Israel. Due to his command of Arabic, Haim served in the IDF Intelligence Corps in capacities that involved gathering intelligence, conducting research and interrogating prisoners. He was a writer for the IDF magazine Bamahane, and when he traveled to Cairo with the entourage of Prime Minister Menachem Begin to cover the peace talks, he scored an exclusive interview with the Egyptian chief-of-staff.

Haim is a volunteer chess teacher in kindergartens and senior citizens clubs. He has a son, a daughter and five grandchildren.