Simcha Applebaum lit one of six torches at the State Opening Ceremony of Holocaust Remembrance Day at Yad Vashem in 2011. 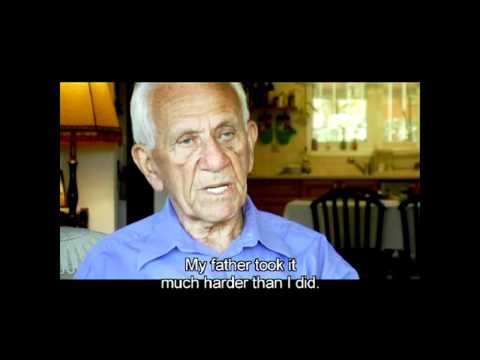 Simcha Applebaum was born in 1927 in the village of Malcz, Pruzhany (today in Belarussia), to a traditional Jewish family.

In November 1941, Simcha and his parents, Yaakov and Rachel, and sister, Ella (Elka), were deported to Bereza Kartuska. After the murder of local Jews, they fled to the Pruzhany ghetto. In May 1942, Simcha joined the Jewish partisans and Soviet soldiers in the nearby forests. In November he returned to the ghetto with a group of friends to get some clothing and food.

The Germans fired at them, and a few of them were wounded. Simcha managed to reach his parents’ house. With the liquidation of the ghetto at the beginning of 1943, Simcha and his family were sent to Birkenau. His relatives were all murdered, but Simcha pretended to be older than he was, and was sent for forced labor. He worked in the construction of crematoria IV and V and the Gypsy camp, laying the train tracks in Auschwitz I, and at various factories nearby.

On 18 January 1945, Simcha was sent on a death march to Gleiwitz, near Auschwitz, and from there west in an open train. In Czechoslovakia, he jumped from the train and escaped. He hid for five weeks with the help of local farmers, but he was caught by the Gestapo, tortured, and sent to Buchenwald, and then Sachsenhausen. On 22 April, he was sent on another death march in the direction of the Baltic Sea. During the journey, Simcha vowed that if he survived he would move to Eretz Israel, and establish a settlement in the memory of his parents and relatives. He also pledged to help establish a Jewish state. On 3 May, he was liberated by the US Army near Schwerin.

After liberation, Simcha joined “Kibbutz Buchenwald” in Germany, and in March 1946 came to Eretz Israel on the Tel-Hai. Simcha fought in the War of Independence. On 20 June 1948, during the first ceasefire, he went with 16 Kibbutz Buchenwald members to a settlement near Be’er Yaakov. There they laid the foundation for the kibbutz, today known as Netzer Sereni. He served in senior positions at the kibbutz, as well as in the Manufacturers Association of Israel.

Simcha fought in all of Israel’s wars up to the Yom Kippur War, reaching the rank of colonel. He was among the planners and founders of the Latrun Armored Corps memorial. Simcha dedicated himself to teaching about the Shoah, and continues to serve as a witness with youth trips to Poland, and to tell his story in schools and to soldiers in the IDF. Simcha and his wife Naomi have three children and nine grandchildren, all of whom served, or are serving, in IDF combat units.