Shela Altaraz lit one of six torches at the State Opening Ceremony of Holocaust Remembrance Day at Yad Vashem ⁣in 2015. 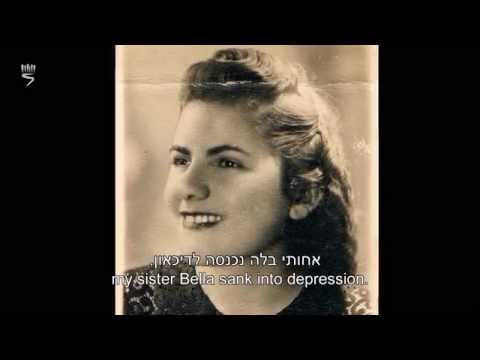 Shela Altaraz was born in 1934 in Štip, Macedonia, the youngest of four children. Her father, David Sion, passed away before the war.

In April 1941, Macedonia was occupied and annexed to Bulgaria. On March 11, 1943, Shela and her family were expelled to the city train station and robbed of their property. Together with hundreds of members of the city’s Jewish community, the family was taken to the warehouses of the Monopol cigarette factory in Skopje, where they were held in terrible conditions.

Three weeks later, Shela’s sister Bella was allowed to leave Monopol due to her Italian citizenship. Before Bella left, their mother Dudun pushed Shela into Bella’s arms, telling her: "Take the little one." Weeping and shocked, Shela and Bella watched from a nearby hill as those left behind were forcibly deported. All of the deported family members were murdered at Treblinka.

Shela and Bella went to Pristina, where Bella ended her life after her husband was imprisoned. Left alone, Shela began doing housework for a friend of her sister. In the spring of 1944, with the expulsion of the Jews of Pristina, Shela and her sister's friend found sanctuary in a Muslim village. Shela fell ill with typhus and was taken to hospital, but fled once more after someone informed on her. The two girls were caught and transferred to a concentration camp for political prisoners. Shela was the only child in the camp; at night she would wake up screaming from nightmares over what she witnessed there. She toiled away and the food was meager. Because she did not utter so much as a word, the camp’s inhabitants nicknamed her "the mute."

After the Red Army liberated the camp, Shela was brought to a house for female survivors. They tended to her injuries, burned her lice-filled clothes and bathed her. She was moved from home to home, eventually arriving at an orphanage in Belgrade. There, in the presence of many children in the same vulnerable state, Shela could finally cry like a child. Shela stayed at the orphanage for four years.

In 1948, emissaries from Eretz Israel came to the orphanage seeking to bring the children to Israel. Shela arrived in Israel in 1949, settling with a Youth Aliya group at Kibbutz Ein Dor, where she met her future husband, Avraham. After serving as a medic in the army, she came to Jerusalem and began working as a nurse at the Talbiya Mental Health Center. She later worked at a WIZO children’s home.