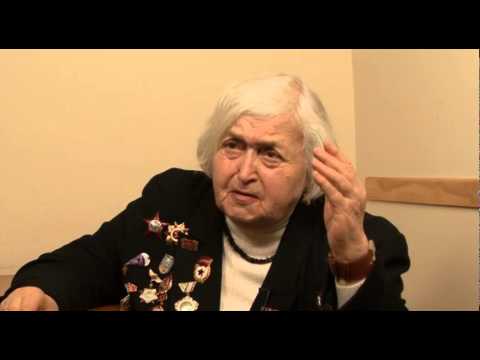 Ida Segal (Firer after her marriage) was born in 1923 in Fastov, Ukraine. In 1929 Ida moved with her family to Kiev. After graduating from a 10-year school, in 1940 she became a student in the Faculty of Geography of Kiev State University.

After the outbreak of the war between the Soviet Union and Germany on June 22, 1941, Ida's father was drafted into the Red Army. He was killed shortly afterwards. In July Ida volunteered to join the Red Army and served on the North-West Front as assistant political commissar in a fortification construction battalion. In the early 1942 she served in the same region in the same function with a paratroop battalion of the 1st Air-Paratroop Corps. Later Ida Segal noted that her service with the paratroops was the fulfillment of her pre-war dream of becoming a pilot. In the interview to The Blavatnik Archive Foundation on 2008 she recalled the moment when she parachuted from an airplane for the first time:

"… The commander [Lieutenant-Colonel Grinev] of the [204th] Brigade called me and said: "whether you want to or not, you have to jump. I had never seen a parachute [beforehand]. He said: Captain Shefer… will fold [your parachute] and show you how to use the parachute, he will explain to you how to hold your arms and legs and how to jump out. … at 5 a.m. they woke us up, took us to an airfield… and loaded us onto a DB-3 [Iliushin bomber aircraft].… They seated in it all the experienced paratroopers and me. What could I do? Since I was already inside, I had no choice but to jump. The boys jumped without any help. [When it was my turn] the pilot slightly tilted the aircraft cabin and I flew out.… Somehow the parachute ring was pulled…. The parachute opened – I was happy. I landed. All had gone well. I reported to the commander that Ida Segal, assistant political commissar, had landed.…"

From August 1942 Ida Segal participated in the Battle for Stalingrad (August 23, 1942 – February 2, 1943), serving as assistant political commissar of a medical company with a medical-sanitation battalion of an infantry division. Under heavy fire and bombing she managed to evacuate from the battlefield to the medical-sanitation battalion several hundred wounded Red Army soldiers and officers. On April 28, 1943 Lieutenant Ida Segal was awarded the Order of the Red Star Order for her devotion and organizational skills.

During the Dnieper Offensive, on the night of October 15-16, 1943 an assault group of the 149th Infantry Division under the command of Ida Segal was the first to cross to the right bank of the Dnieper River, capturing and holding a bridgehead that enabled other Red Army units to cross. For this feat she was nominated for the distinction of Hero of the Soviet Union, but on October 28, 1943 she received the lesser honor, the Order of the Red Banner. At this time two military newspapers, The Red Army and For the Motherland, published articles about her heroism. Shortly afterwards Ida was reassigned as assistant political commissar to a communications regiment. It was in this post that she celebrated the Soviet victory in 1945 when she was in Poland. According to her own account, she did not encounter any antisemitism during her military service. She also stressed that she learned about the Nazi mass murder of Soviet Jews only from the press, not from any personal experience.

In 1945 Ida married Alexander Firer, a Red Army Jewish officer. The couple later lived in Odessa. In the post-Soviet period she immigrated to the USA.

In The Shadow of the Red Banner: Soviet Jews In The War Against Nazi Germany
$36.00
Buy Now

The Holocaust in the Crimea and the North Caucasus
$39.00
Buy Now