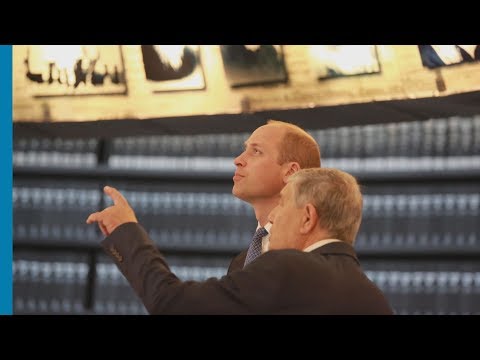 In addition, during the course of his visit to Yad Vashem, the Duke of Cambridge met in the Museum of Holocaust Art privately with two Holocaust survivors, Paul Alexander and Henry Foner, survivors of the Kindertransport rescue initiative.

"It has been a profoundly moving experience to visit Yad Vashem today. It is almost impossible to comprehend this appalling event in history.  Every name, photograph and memory recorded here is a tragic reminder of the unimaginable human cost of the Holocaust and of the immense loss suffered by the Jewish people.  The story of the Holocaust is one of darkness and despair, questioning humanity itself.  But the actions of those few, who took great risks to help others, are a reminder of the human capacity for love and hope.   I am honoured that my own great grandmother is one of these Righteous Among the Nations.

We must never forget the Holocaust - the murder of 6 million men, women and children, simply because they were Jewish. We all have a responsibility to remember and to teach future generations about the horrors of the past so that they can never reoccur.  May the millions of Jewish people remembered by Yad Vashem never be forgotten. "

The British royal family has an honorable connection to the history of the Holocaust. In 1993, Princess Alice of Battenberg and Greece, great-grandmother of Prince William, was recognized as Righteous Among the Nations by Yad Vashem for her role in rescuing the Cohen family in Greece during the Holocaust.

Previous Visits by Members of the British Royal Family

While Prince William's visit to Israel is the first official British royal family visit to the region, there have been several visits by members of the royal family to Israel, including visits to Yad Vashem. In 1994, Prince Philip, Duke of Edinburgh, husband of Queen Elizabeth II, visited Yad Vashem to attend the Righteous Among the Nations ceremony and planted a tree in honor of his late mother Princess Alice of Battenberg and Greece. In 2007, Prince Edward, Earl of Wessex, the youngest child of Queen Elizabeth II, toured Yad Vashem and visited the tree planted in honor of his grandmother, Princess Alice. Finally, in 2015, Prince Charles, Prince of Wales, visited Israel to attend the funeral of Israel's President Shimon Peres and visited the grave of his grandmother, Princess Alice located in the Church of Mary Magdalene on the Mount of Olives.