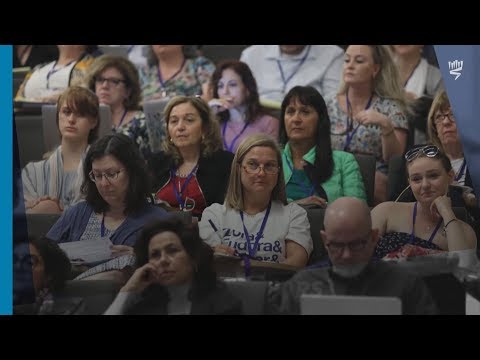 Over 350 international leaders in Holocaust education, from five continents and 50 countries, gathered the last week of June at Yad Vashem's International School for Holocaust Studies for its 10th International Conference on Holocaust Education, entitled "Time, Place and Relevance".

The conference presented lectures, panel discussions and interactive workshops by some of the world's leading Holocaust historians, scholars and educators. Each day of the four-day conference tackled a range of aspects connected to Holocaust education in the 21st century. The mornings were dedicated to plenary sessions, while afternoons included breakout sessions allowing participants to play a more active role in the proceedings. The conference was held in English with simultaneous translation to French, Russian and Spanish.

Director of the International School's Jewish World and International Seminars Department Ephraim Kaye explained that the goal of the conference was to "provide an international, intergenerational and multicultural forum for an experiential dialogue on how to preserve the legacy of the Holocaust and how to face the challenges of ensuring that Holocaust education is relevant for years to come."

Many experts from Yad Vashem's International School for Holocaust Studies, International Institute for Holocaust Research and Archives Division presented topics related to their area of expertise. One of the first lectures of the conference was delivered by Yad Vashem Senior Historian and Editor-in-Chief of the academic journal Yad Vashem Studies Dr. David Silberklang on the topic of "What Was the Holocaust." Dr. Silberklang told how in the late spring of 1944 the Germans carried out an operation to gather and deport all the Jews located on the scattered islands of Greece. "Despite the advancements of the Allied Forces throughout Europe and the pending collapse of Germany as World War II was ending, it was a 'seek-and-destroy' mission of the Nazis to murder all the Jews of Europe and North Africa."

Former Israeli Ambassador to the United States, MK Michael Oren, addressed the plenary at the conference, pointing out how "all Jews, especially of my generation, walk around with their own personal Holocaust." Oren recalled that growing up Jewish in the United States, the Holocaust wasn't discussed as openly as it is today – it was "just beneath the surface." He applauded the participants for their dedication in educating and keeping the memory of the Holocaust alive and relevant for future generations.

Director of Yad Vashem's Visual Center Liat Benhabib gave a fascinating lecture, entitled "From Newsreels to YouTube: Film and the Holocaust." She stated: "Filmmakers try to reconstruct memory – and today, everyone is a filmmaker. Especially as survivors pass away, I believe that film will become even more important in Holocaust remembrance and education."

On the last day of the conference, participants had the opportunity to meet and interact with several Holocaust survivors from a variety of locations and backgrounds. Frieda Kliger, whose image was used on ( much)  all of the conference materials and posters, was in attendance. One of the only member of her family to survive the Holocaust, Kliger described how after liberation she noticed "only sadness in people's eyes." She and her late husband were among the first to marry after liberation in the Bergen Belsen DP Camp on 18 December 1945. "I chose to put life into his eyes," she remembers. Kliger now has two children, four grandchildren and three great-grandchildren, some of whom were present at the conference.

The culminating point of the 10th International Conference was a candid conversation between Yad Vashem Chairman Avner Shalev and Director of the Auschwitz-Birkenau State Museum Piotr M.A. Cywiński. These two institutions represent two aspects of Holocaust remembrance and education: Auschwitz-Birkenau, the authentic site of the murder of over a million Jews during the Holocaust; and Yad Vashem, the World Holocaust Remembrance Center, complete with its world renowned Museum Complex, Archives and Museums, Art and Artifacts Collection. Each of these institutions contribute and shape the way the world relates to the Holocaust, remembers it, and teaches it to future generations. During the session, which was moderated by Director of Yad Vashem's International Institute for Holocaust Research Dr. Iael Nidam Orvieto, the two shared their perspectives of where Holocaust remembrance and education is headed in an age when there will be no more Holocaust survivors left to tell their stories.

While Shalev explained how Yad Vashem stresses the human experience in its museums as well as in its educational approach and programs, Cywiński stated: "If the Holocaust is only part of history, it isn't enough. It needs to be part of our history."

Throughout the conference participants had the opportunity to network with fellow educators from around the world, thus gaining new ideas for effective teaching methods. Concluded one educator from the United States: "The 'cross-pollination' exchange of ideas and points-of-view between people from different backgrounds will only enrich the educational experiences in each of our classrooms."

How was it Humanly Possible? - A Study of Perpetrators and Bystanders during The Holocaust
$29.00
Buy Now