"For the sake of future generations, so that the story will never be forgotten" 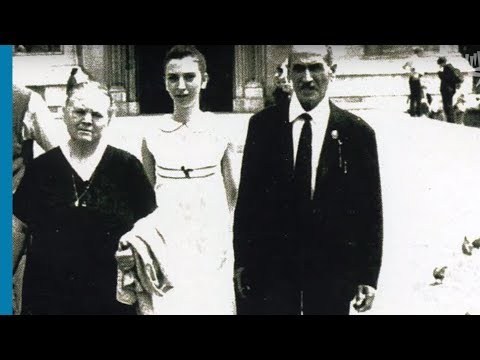 Dr. Marina Norsi, wife of the late Holocaust survivor Ettore-Israel Norsi, made these remarks at the ceremony that took place today at Yad Vashem, the World Holocaust Remembrance Center, honoring her late husband's wartime rescuers. "It was my husband's dying wish that the families remain connected, even once the first generation was no longer with us, as an example of the continuing goodness and kindness from a time of destruction and despair." These two families, who hailed from different worlds, have one thread in common: a sense humanity and duty to each other. While Ettore-Israel Norsi believed that no ceremony or certificate could sufficiently express his gratitude to his family's rescuer, the Giardini and Norsi families gathered today at Yad Vashem to pay their respects to the rescuers of the Norsi Family – Adelmo and Eva Giardini and Pietro and Zelinda Giardini from Italy – and mark their historic honor as Righteous Among the Nations.

To date, Yad Vashem has recognized some 27,000 individuals from over 50 countries as Righteous Among the Nations, including 694 men and women from Italy, and each year that number continues to grow by several hundred. The most recent ceremony, which took place at Yad Vashem, the World Holocaust Remembrance Center, on Sunday, 12 August 2018, posthumously honored Adelmo and Eva Giardini and Pietro and Zelinda Giardini for their efforts in rescuing Jews during the Holocaust. Director of Yad Vashem's Righteous Among the Nations Department Dr. Joel Zisenwine presented the medal and certificate of honor to Barabara Giardini and Loredana Giardini, granddaughters of the late Pietro and Zelinda Giardini, on behalf of Yad Vashem, the State of Israel and the Jewish people.

"These ceremonies are evidence of the sense of obligation and responsibility exhibited by both the families of the rescued and rescuers," Dr. Zisenwine stated. "Despite the years and the loss of the first generation of rescuers and survivors, the eternal bond between the families is a common trend we see over and over again."

Today, the names of Adelmo and Eva Giardini and Pietro and Zelinda Giardini were added to the Wall of Honor in the Garden of the Righteous Among the Nations at Yad Vashem.

Odoardo Norsi, who worked as a train driver, lived with his wife, Ermina, and their son Ettore-Israel in Genoa. In the summer of 1943, the family left Genoa for the countryside on their annual vacation. Following the Italian armistice with the Allies and subsequent German occupation of Italy on 8 September 1943, the family decided to separate. Ermina remained with her elderly parents in a village outside of Genoa. Odoardo took his brother-in-law, Angelo Veroli, and the couple's son Ettore and headed south to Tuscany. They found refuge for three days in Boscarelli and then, through Odoardo's railway contacts, 17-year-old Ettore was sent to live with the extended Giardini family  ̶  Adelmo and Eva Giardini and their children, and Pietro and Zelinda Giardini and their children  ̶  at their Nebbina estate in Castelnuovo Berardenga. The Giardinis treated him as one of the family. To allay the suspicions of the neighbors, they took him to church on Sundays and introduced him as a relative sent to the countryside to escape the aerial bombardment of the Italian cities. Ettore helped with the household chores and worked in the vineyards during the harvest. The Giardinis, cognizant of the fact that Jews did not eat pork, abstained from serving it to their guest. As the fighting moved northward, the family prepared a hiding place for him in the forest should the need arise. Despite the danger to themselves and their families if discovered sheltering a Jew, the Giardinis continued to care for Ettore for almost two years. After the liberation of the area in August 1944, the Norsi family was reunited and returned to Genoa. Over the years, Ettore remained in touch with members of the Giardini family.