“Today we acknowledge the fateful role of so many Austrians in this dark chapter of history.” 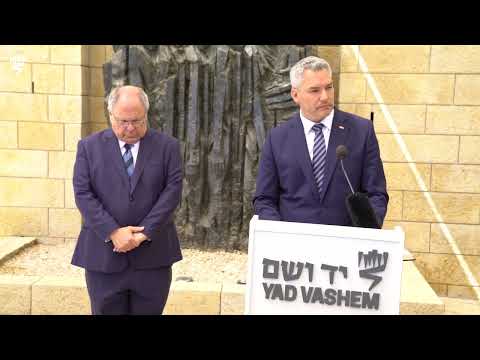 The Chancellor of Austria H.E. Mr. Karl Nehammer visited Yad Vashem, the World Holocaust Remembrance Center, yesterday. During his visit, the Chancellor toured the "Flashes of Memory – Photography during the Holocaust" exhibition, which displays photographs taken before, during and after the Holocaust from three different perspectives – the perpetrator, the victim, and the liberators.

The Chancellor also participated in an official memorial ceremony in the Hall of Remembrance, visited the Children's Memorial, dedicated to the 1.5 million Jewish children murdered during the Holocaust, and signed the Yad Vashem Guest Book.

In a statement made by the Chancellor in Janusz Korczak Square on the Mount of Remembrance, he announced a long-term partnership between Yad Vashem and the State of Austria. This cooperative venture will focus on four specific areas: Safeguarding the Record, New Forms of Commemoration, Reaching New Audiences, and Advanced Research.

“For every Austrian citizen, Yad Vashem is an eternal reminder of our accountability during the Shoah, but also in the many years, decades, and centuries before, when antisemitism and anti-Jewish hatred flourished in Austria and laid the foundations for the greatest crime in humanity. Yad Vashem is also a reminder that we must protect Jewish life and keep it alive today, and fight decisively against all forms of antisemitism in Austria, in Europe, [and] all over the world."

During his remarks, the Chancellor expanded on Austria's commitment to Holocaust remembrance:

"In view of the Austrian National Strategy against Antisemitism, as well as Austria's pledges made at the Malmö International Forum by Austria in October 2021, I am honored to announce a new multiyear cooperative partnership between Yad Vashem and my Chancellery that will enhance efforts in Austria to increase Holocaust remembrance, education and research."

“We cannot rewind history. Nations should be judged today not by their past, but by the way they confront it. Unfortunately, not all nations in Europe have faced their past with total honesty. The Federal Republic of Austria has shown its remarkable dedication to the memory of the victims of the Shoah as well as the survivors. We are looking forward to working closely together with our Austrian partners, ensuring meaningful and effective Holocaust awareness and commemoration for the Austrian people.”

At the conclusion of the visit, the Chancellor, who was accompanied by Austrian Federal Ministers of Defense Klaudia Tanner and Interior Gerhard Karner, met with Yad Vashem Chairman Dani Dayan.