"How lucky we are to be connected to such heroism"

Memorial Ceremony Marks 75 Years since the Jewish Revolt at Sobibor 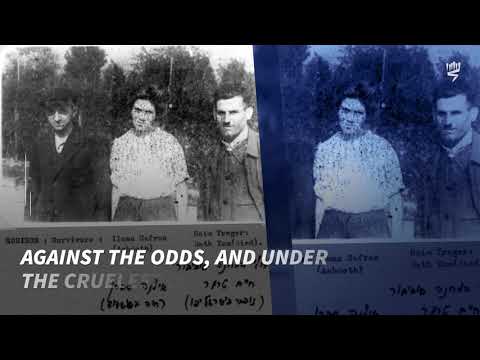 On 9 October 2018, a memorial ceremony and event was held at Yad Vashem, the World Holocaust Remembrance Center, commemorating 75 years since the Jewish revolt at former German Nazi death camp Sobibor. The memorial event took place at the Yad Vashem Synagogue, in the presence of Holocaust survivors and next generations, as well as the Ambassadors of the Netherlands and Slovakia in Israel and diplomatic representatives from Poland and Russia.

Researcher Naama Galil from Yad Vashem's Commemoration and Community Relations Division lectured on the history of the camp and the revolt at Sobibór. One of three "Operation Reinhard" extermination camps, Sobibór began its deadly work in April 1942. Sobibor was chosen due to its proximity to railway tracks and its isolation from the surrounding population. Most of the victims of Sobibor arrived via trains. After several failed plans and attempts at escape, on 14 October 1943, two Jewish prisoners, Leon Feldhendler and Lieutenant Aleksander (Sasha) Pechersky, a recently arrived Jewish POW from Minsk, planned and led the mass revolt and escape of some 300 Jews incarcerated and awaiting extermination at Sobibór. Nearly half of the inmates were killed while escaping, and many others were caught in the manhunt that followed. Approximately 50 survived by hiding in the nearby forests. Historians have since estimated that between 170,000 to 250,000 Jews were murdered at Sobibor by the time the camp closed in 1943 following the uprising.

"Despite the fact that it took place on occupied Polish soil, and was carried out by German Nazis and their collaborators, on Jewish victims from across Europe as well as North Africa, and despite its universal implications, Sobibor is above all a Jewish story," stated Yad Vashem's Director of Governmental and External Affairs Yossi Gevir. Gevir also praised the ongoing international and professional efforts to establish a new visitors center at the site of the former death camp that will accurately educate future generations about its terrible history and fittingly commemorate its victims.

Devorah Fishman (Lichtman), daughter of the late Sobibor survivors Eda Fischer and Jitschak Lichtman, spoke about both the burden and honor of growing up as a member of the Second Generation. The most important lesson she learned from her parents was how they preserved their humanity in the camp, and later found "the proper way to live a normal life." "How lucky we are to be connected to such heroism," she concluded.

Since 2007, archeology doctoral student Yoram Haimi has led excavations at the site of the former death camp together with his Polish counterpart, Wojciech Mazurek, supported by Yad Vashem International Institute for Holocaust Research and Directorate. In his lecture, Haimi revealed that over the past 11 years, teams of volunteers at the site have unearthed over 70,000 artifacts, including wedding rings, personalized pendants, false teeth, keys, and even door signs with the names of families deported to the camp in the belief they were relocating. "Each small item carries with it a fascinating story," Haimi emphasized.

Despite the German efforts to destroy the camp in an attempt to erase all evidence of its existence, and the subsequent building and roads laid  over many important components of the camp, the archeological team showed, with the help of aerial and 3D images, much of the camp's structure: the exact locations of eight gas chambers, 21 burial pits and nine open crematoria, in addition to the "Himmelstrasse" (pathway to heaven) along which the victims were hurried towards the gas chambers, the women's disrobing hut and the living quarters of the camp's commandants. "Our archeological work proves for future generations that Sobibor existed," Haimi concluded. Gevir concurred: "You are exposing with at the Germans tried to hide – the truth about Sobibor."