Kites of Hope and Love

Inspired by the teachings of Janusz Korczak and his team, members of the Hamahanot Haolim youth movement gathered at Yad Vashem to mark the anniversary of the murder of Korczak, Stefa Wilczynska and the children of the Warsaw ghetto orphanage 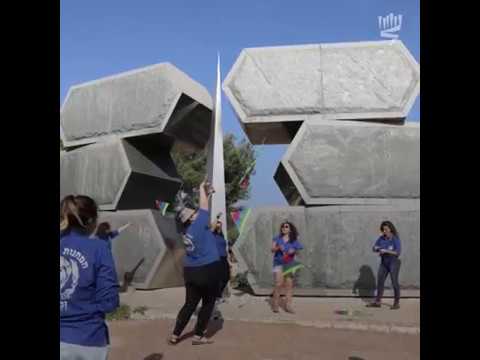 Yesterday marked the 76th anniversary of the deportation and murder of Janusz Korczak, Stefa Wilczynska and the children of their orphanage, from the Warsaw ghetto to Treblinka. Together with the Hamahanot Haolim Youth Movement, Yad Vashem, the World Holocaust Remembrance Center, commemorated the day with a special educational symposium at Yad Vashem's International School for Holocaust Studies, which was based on the subject of respect, love and equality for all people of all ages – in the spirit of the philosophy heralded by Korczak.

Following the educational portion of the day, a memorial ceremony was held at Janusz Korczak Square. Miri Bar, Coordinator of Informal Education in the Educational Guiding Department at Yad Vashem's International School of Holocaust Studies, moderated the program, which explored Janusz Korczak's connection to the Land of Israel and detailed both Korczak and Wilczynska's desires to emigrate to the Jewish homeland. Despite repeated attempts and even following a brief stint in Israel, both returned to Poland before the outbreak of WWII out of love and concern for the children of their orphanage.

Following the wreath-laying ceremony at the foot of the sculpture in the image of Janusz Korczak and the children (designed by Boris Skatsier), members of Hamahanot Haolim flew kites of hope for a better future filled with peace, respect and love.

Upon seeing the dozens of kites flying high over the Monument to the Jewish Soldiers and Partisans who fought against Nazi Germany, Yossi Nadel, son of Holocaust survivor and former student of Korczak's Shlomo Nadel, reflected: "Korczak believed each kite was like a child filled with hopes and dreams. All they need is the wind in order to fly."

How was it Humanly Possible? - A Study of Perpetrators and Bystanders during The Holocaust
$29.00
Buy Now