Ilaria Noci is a graduate of a Yad Vashem seminar for Italian educators held in August 2011, coordinated in conjunction with the Italian Ministry of Education. She is a teacher at the Instito Tecnico Economico “Raetia” in Italy.

The project builds on the seminar on the Holocaust, held in Yad Vashem from August 27th to September 5th, 2011. Back from Israel, I had no doubts about which was the warning for us teachers: commit ourselves to fight the recurrence of so much evil opposing racism and intolerance.At that point, dropped into my reality, I turned all my strength to transmit this experience to all those who were ready to explore the theme of living in peace with all mankind.

This theatre project was conceived and performed by the students of fifth form 5B of the Istituto Tecnico Economico “Raetia” Ortisei – Val Gardena (BZ) in Italy. Speaking of the subject with two colleagues, the professors Sonja Kammerlander1 (German teacher) and Maria Teresa Mussner2 (English teacher), who during the summer had thought of setting up a theater workshop with their students, we had the idea to join forces and work with our students making a play to commemorate the Holocaust.

So soon emotionally involved, the fifth grade students (12 girls and 4 boys), sec. B, of the Istituto Tecnico Economico (Technical Institute of Economics) “Rezia”, Ortisei, accepted our idea and also committed to participate in the ministerial contest "Young people commemorate the Holocaust."
Thus relying also on the very precious help of Professor Karl Silgoner, religious education teacher, we started to work.

To better prepare our students to do this "small", great task, we began a series of educational activities within our teaching subjects: Italian, history, German, English and religious education.
First we worked on the construction of historical knowledge, then we moved on to the study of individual life events which we could give a voice in the play.
Besides the use of textbooks, we focused on reading paradigmatic texts of Holocaust literature, as well as on viewing films and documentaries (see bibliography).
At the same time and in the same way the theme of the Holocaust was treated in the other fifth form of the school, too. For organizational reasons, however, only the fifth sec. B was chosen to write and perform a class play.

Very useful were the materials I had gathered and received at Yad Vashem. In particular, we valued the texts used in class by Yiftach Meiri on the history of Polish Jews after the liberation.

We got in touch with the Jewish community of Merano (BZ). Dr. Federico Steinhaus, who was very open and willing to provide us with every information we required, came to our school for a meeting-debate with students on the theme of the Jews returning home after the experience in the concentration camps.
Soon after, in order to train the students to a broader and more complete view, we paid a visit to the concentration camp at Dachau.

For the actual construction of the theater piece we asked the advice of a professional actress. Ms. Katja Lechthaler accompanied the students on this new and challenging path. Students and teachers involved attended actively a five-day workshop with Ms. Lechthaler and finally managed to set up their own play. 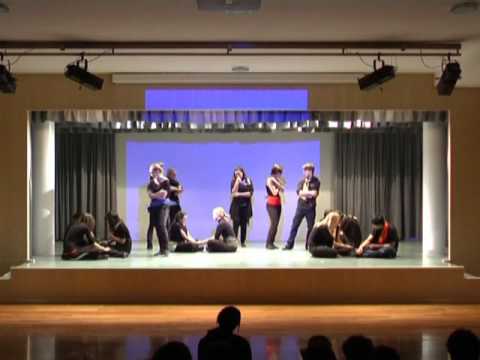 To enter the ministerial competition it was necessary to film with a camera our theater play. We therefore contacted Matthias Höglinger, who filmed the scenes cut the images. On this occasion it should be emphasized that through the video recording of the piece a large part of its "scenicity" unfortunately went lost.

Our theater play was staged on January 27th, 2012 before an audience of students and parents in our school. Local and public authorities followed our invitation.
I proudly point out the remarkable resonance that our project has had on the local press.
I’d finally like to mention the support of our head teacher, Dr. Bruno Senoner who made the project possible, and also of the Department of the Ladin school, who contributed greatly in economic and organizational terms.
I should at this point, also highlight the sensitivity of our teacher colleagues who have always shown willingness to facilitate this initiative.

Script of the Play