Shimon Srebernik giving testimony at the Eichmann trial, demonstrating the length of his leg irons with his hands, 1961

Shimon Srebernik with family members before the opening of the Holocaust History Museum at Yad Vashem, March 2005

Shimon Srebernik with his wife, viewing his video testimony in the Holocaust History Museum, March 2005 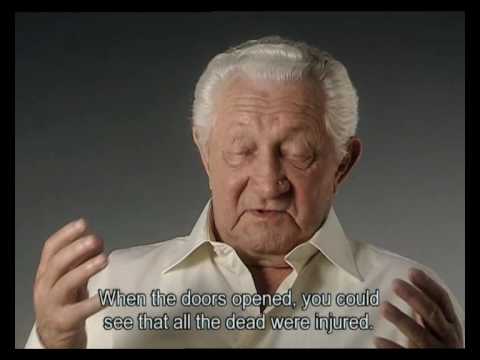 Shimon Srebernik was born in 1930 in Lodz, Poland to David and Leah Srebernik. Following the Nazi occupation Shimon and his family were incarcerated in the ghetto. In 1943, Shimon and his father were snatched from the streets of the ghetto as they made their way to the synagogue. His father resisted and was shot on the spot. Shimon managed to escape, but was deported to the Chelmno death camp a few months later.

Upon arrival, the prisoners had their feet manacled and they were sent to work clearing the ruins of the fort there. Those who arrived on later transports were murdered on arrival in gas vans. Most of the prisoners who arrived with Shimon were murdered after a few days and replaced by others. Shimon managed to avoid being selected, surviving partly thanks to an SS man, Walter Bornmeister, who took a liking to him and protected him.

Shimon worked under this SS man’s supervision removing gold teeth from the murdered victims and sorting through their belongings. One day, when going through the victims’ personal effects, he found photos of his own family and understood that his mother too had arrived at Chelmno and was no longer among the living.

As the Red Army drew closer, the Germans decided to destroy the camp and dispose of any evidence of their crimes. Only a few days before the area fell into Soviet hands, all the prisoners were murdered with gunshots to their necks. Shimon was also shot and wounded but he did not die. In the chaos that ensued, he managed to remove the shackles from one leg and escape to a nearby village where he hid in a pigsty.

Having noticed that a prisoner had escaped, the Germans went in search of him, promising a cash reward for anyone who turned him in.  The wounded Shimon approached one of the farmers he knew,  but he was afraid to harbor Shimon and reported his appearance to the head of the village. Fearing the approaching Soviet troops, the head of the village ordered him not to turn in the fugitive. Shimon hid until the Red Army arrived, and survived.

In 1948 he immigrated to Israel with his wife Chava and they made their home in Nes Ziona.

In 1978, Shimon returned to Chelmno for the filming of Claude Lanzman’s film “Shoah”.  Revisiting the place he had hidden, the farmer returned the leg irons to him. Shimon gave testimony at the Eichmann trial  and at the trials of the commanders of the Chelmno camp. He donated the leg irons to Yad Vashem for display in the new Holocaust History Museum which opened in 2005.