Shoshana and Avraham Rushkovsky at the presentation ceremony, Yad Vashem, 2004 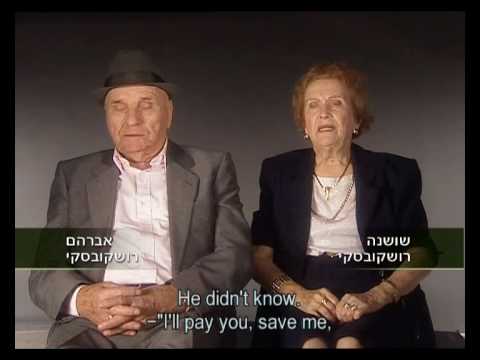 At war’s end, the American-Jewish Joint Distribution Committee (AJJDC) labored to provide services for the Jewish DPs, including distribution of food rations and clothing. It also helped finance the activities of the various committees in the DP camps, as well as the educational activities of ORT and the Jewish Agency. In addition, the Joint’s funding helped Jewish refugees reach the DP camps and then leave Europe. Of these, some 115,000 reached Eretz  Israel by 1948.

In an emotional ceremony in 2004, a Chuppa was loaned to Yad Vashem by the AJJDC for display in the Holocaust History Museum.  The Joint turned to the Jewish community in Eretz Israel to contribute wedding canopies and rings for use in marriage ceremonies held in the DP camps in Europe. These and many other ritual items were sent to thousands of Holocaust survivors who wished to rebuild their lives and create new families.

Avraham and Shoshana Rushkovsky were one of seven couples who were married on May 19th 1945 in the Bergen-Belsen DP camp. Avraham, who survived the war hidden with a Christian family, met Shoshana in the Bergen-Belsen DP Camp hospital when he was treated for a broken leg. Shoshana, the survivor of three concentration camps, volunteered in the hospital that was set up by the British liberators of the camp to treat the survivors.

As sole survivors of their respective families, the wedding was an occasion of mixed emotions. Shoshana’s wedding attire was a black skirt and a shirt that was a few sizes too big. The veil was a large gauze bandage. Two dwarfs who had survived Mengele’s experiments played the music. “We stood up to dance and forget our sorrows. We danced until dawn”, recalls Shoshana. The couple’s son, Moshe, was born in September 1946 in Bergen-Belsen, and two years later the family were able to immigrate to Israel.

The Rushkovskys were present at the presentation of the wedding canopy.  For Avraham and Shoshana, the return of this artifact to Israel so many years after the dismantling of the DP Camps served as a kind of closure. Avraham and Shoshana’s wedding in Bergen-Belsen was the start of a new life of hope. Shoshana spoke at the ceremony: “Though we are smiling today, the ceremony and the memories of our wedding in the camp take us back to those terrible times… we lost our families, but we created a new family and got on with our lives.”

Loaned by the American Jewish Joint Distribution Committee, New York, NY, USA
The wedding canopy was donated to the AJJDC by Jane and Stuart Weitzman, USA

"Let them make Me a sanctuary that I may dwell among them”: The Yad Vashem Synagogue
$48.00
Buy Now