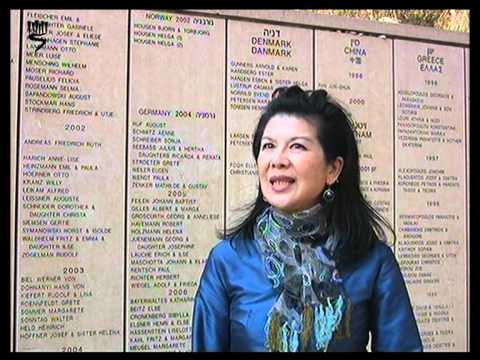 Feng-Shan Ho, the Chinese Consul-General in Vienna, was given the title of Righteous Among the Nations for his humanitarian courage in issuing Chinese visas to Jews in Vienna in spite of orders from his superior to the contrary.

After Austria’s annexation to Nazi Germany in March 1938, the 185,000 Jews there were subjected to a severe reign of terror, which resulted in intense pressure to leave the country. In order to do so, the Nazis required that Jews have entry visas or boat tickets to another country. However, the majority of the world’s nations refused to budge from their restrictive immigration policies, a stance reaffirmed at the Evian Conference, in July 1938.

Unlike his fellow-diplomats, Ho issued visas to Shanghai to all requesting them, even to those wishing to travel elsewhere but needing a visa to leave Nazi Germany.

Many of those helped by Ho did indeed reach Shanghai, either by boat from Italy or overland via the Soviet Union. Many others made use of their visas to reach alternate destinations, including Palestine, the Philippines, and elsewhere, such as the parents of Secretary-General of the World Jewish Congress and Vice Chairman of the Yad Vashem Council, Dr. Israel Singer, who traveled to Cuba.

Eric Goldstaub, who had immigrated to Canada, related how, in July 1938, he received Chinese visas for his entire family after spending “days, weeks, and months visiting one foreign consulate or embassy after the other trying to obtain visas for [himself, his] parents and [their] near relatives, numbering some 20 people.”

Lilith-Sylvia Doron, who had immigrated to Israel, met Ho accidentally as both watched Hitler entering Vienna, on 11 March 1938 — a time when physical assaults were being waged by the Nazis against the city’s Jews.

“Ho, who knew my family, accompanied me home,” says Doron. “He claimed that, thanks to his diplomatic status, the [Nazis] would not dare harm us as long as he remained in our home. Ho continued to visit our home on a permanent basis to protect us from the Nazis.”

When Doron’s brother, Karl, was arrested and taken to Dachau, he was released thanks to a visa issued by the Chinese consulate. Doron and her brother left Vienna in 1939 for Palestine.

The rush for visas assumed panic proportions during and immediately after Kristallnacht, in November 1938, when thousands of Jews were thrown into concentration camps, only gaining release if their relatives produced visas or tickets for travel to other destinations. Gerda Gottfried Kraus, based in Canada, relates that after Kristallnacht, her husband waited in a long line for admittance into the Chinese consulate. Seeing a car approaching the consulate’s gates, he thrust his application form through its window. “Apparently, the consul-general received it, because [my husband]  then got a call and received the visas.”

Ho refused to abide by the instructions of his superior, the Chinese ambassador in Berlin, Chen Jie. Chen Jie, hoping to cement closer ties between China and Germany, had forbidden Ho to issue visas on such a large scale, estimated to run into the hundreds, perhaps even thousands. Although visas were not required for entrance to Shanghai, such a document was, as noted, a prerequisite for Jews wishing to leave Nazi Germany. It is believed that the “demerit” which was entered in Ho’s personal file, in 1939, at the Chinese Foreign Ministry was linked to his insubordinate behavior towards his immediate superior, the ambassador in Berlin, on the issue of the visas. After a long diplomatic career, Ho retired in 1973, and died in 1997, at the age of 96.

It was only after his passing that evidence by survivors who benefited from Ho’s aid began to reach Yad Vashem. After carefully evaluating the case, the Commission for the Designation of the Righteous decided in the year 2000 to award Feng-Shan Ho the title of Righteous Among the Nations for his humanitarian courage in issuing Chinese visas to Jews in Vienna in spite of orders from his superior to the contrary.

On August 8, 2000, Yad Vashem Feng Shan Ho as Righteous Among the Nations.