The Armoire that Saved Her Life 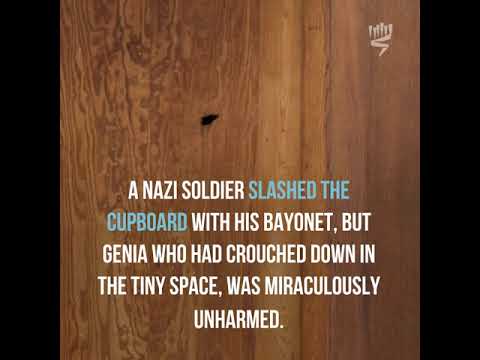 In Israel, the topic of the Holocaust is discussed often, both in the family of Holocaust survivors, and in wider society. Tamar Doron studied about the Holocaust in school, participated in annual Holocaust Remembrance Day and other commemorative ceremonies, and heard her mother, Genia, talk about her life during the Holocaust and how she was rescued by a Polish family and lived in a convent. Nevertheless, she never knew the finer details about how her mother had survived, nor could she have ever imagined the story she was about to uncover.

Genia, was born Chaya Gitel Sznajder in 1925 to parents Avraham and Eta in the Lublin district of Poland. She had three brothers, two older and one younger. In 1942, when the Germans began deporting the Jews of their town of Szreniawa, the Sznajder family tried to find refuge with local Christian farmers. Only Genia, then 16 years old, was successful in her quest. An old school friend, Barbara Dobrolubow, and her family insisted she come stay with them. Although it was extremely risky to agree to hide even a single Jew, Barbara told Genia that she would not allow anything to happen to her dear friend.

In 2017, Tamar and her family decided to travel to Poland, to retrace her late mother's footsteps from before and during the Second World War. During their trip they went to visit the Donhall family, descendants of Barbara Dobrolubow, one of Genia's rescuers. During their visit, Krizisztofer, Barbara's son, invited the Dorons up to the attic, and proceeded to show them a dismantled armoire bearing a large puncture hole. Confused, Tamar asked the Polish family to explain the connection to Genia. The story Krizisztofer told them shocked them to the very core…

While Genia was in the Dobrolubows' house, local German officials learned that there were Jews hiding in the village. The Nazi soldiers went house to house in search of Jewish fugitives. Everyone knew that any Jew found would be shot, and the family providing them with refuge would most likely meet the same fate. When the Nazis came to Dobrolubows' house, Genia hid inside an armoire and the door was locked. The soldiers searched the house, and when they saw the armoire, they demanded it be opened. The family claimed that the armoire was empty, and that they had lost the key. One of the soldiers proceeded to take his bayonet and stab the closet, puncturing a hole in the door to see if anyone was inside. On finding no evidence, the soldiers left, satisfied that there were no Jews to be found there.

A few weeks later, the Dobrolubows decided to send Genia to relatives of theirs in Warsaw, where no one knew her. They reasoned that with her "Aryan" looks, she had a better chance of surviving in the capital city. In Warsaw, Genia was taken in by Zygmunt and Jadwiga Koczorowski. She was given “Aryan” documents and assumed the identity of Augenia Kovalska. The Koczorowskis registered Genia at a local convent high school run by the Urszulanki Sisters, keeping in touch with their young charge until the outbreak of the Warsaw Uprising in August 1944. After the suppression of the Uprising, the Koczorowskis were deported to a concentration camp along with other local Poles who had participated in the revolt. At the end of the war, they met up again in Warsaw, and Genia stayed with the Koczorowskis until she finished her studies. After the war, Genia was reunited with her two older brothers, who survived Auschwitz, and discovered that her parents and youngest brothers had also been deported to Auschwitz and were murdered there. In 1954, Genia immigrated to Israel where she married and built a family, sharing only the bare minimum of her wartime rescue with her loved ones.

On their return to Israel, Tamar and her family realized that something had to be done to commemorate and pass on the remarkable story. They contacted Yad Vashem, the World Holocaust Remembrance Center, which had previously recognized the Dobrolubows and the Koczorowskis as Righteous Among the Nations, the highest honor bestowed by the State of Israel and the Jewish people to non-Jews who risked their lives to rescue Jews during the Holocaust.

"After speaking to Krizisztofer we knew that this was the right place for the armoire, and more importantly where our mother's experiences during the Holocaust can be remembered forever. It's almost as if both our dear mothers in heaven are pulling the string and completing the circle of their true friendship," Tamar Doron recalled.

The armoire – the only one of its kind in Yad Vashem's Artifacts Collection – arrived on the Mount of Remembrance in Jerusalem in late December 2018 and has been carefully restored by Yad Vashem experts.

"There are many stories of Jewish children who hid in wardrobes and other pieces of furniture during the Holocaust, but we have never received the actual artifact. Most of these items were either destroyed or lost over the years. To find this armoire intact is truly remarkable. Objects such as this helps us illustrate how Jewish children like Genia survived during this dark chapter of our not-so-distant past, and provide a sense of what life under Nazi persecution was really like."

"This unique armoire joins the tens of thousands of items in Yad Vashem's Collections that will be stored in the Shoah Heritage Collections Center, a brand new state-of-the-art facility to be built on the Mount of Remembrance, which aims to preserve, catalogue and display these items as everlasting witnesses to the horrors of the Holocaust. Every item we receive, large or small, is another part of the mosaic of the Holocaust, another building block in truthful Holocaust remembrance."