Avraham Aviel lit one of six torches at the State Opening Ceremony of Holocaust Remembrance Day at Yad Vashem in 2011. 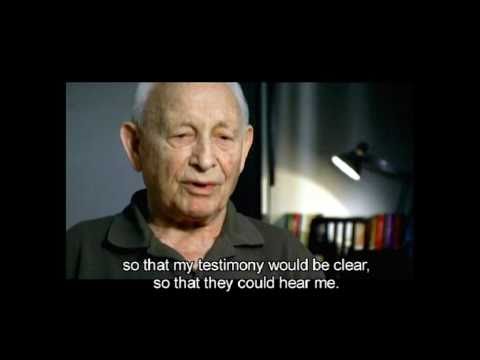 Avraham Aviel was born in 1929 in Dugalishok, a Jewish farming village (today in Belarussia), to Moshe David and Sarah Mina née Lipkunsky. Moshe David was a blacksmith and Sara Mina came from a rabbinical family in Eišiškis, Lithuania.

At the end of 1941, the Jews of Dugalishok were sent to the Radun ghetto. On 10 May 1942, Avraham, his mother, his brothers and the rest of the ghetto residents were taken to a death pit near the cemetery in Radun. There, most of them, including Sara Mina and Avraham’s young brother Yekutiel, were shot to death.

Avraham and his older brother Pinchas managed to escape. The two returned to the Radun ghetto, but two days later ran away to the nearby forest, where they found their father. He had escaped with a group of Jews while being led to dig the pit. In December 1942, Avraham and Pinchas left to meet partisans in Dugalishok and were ambushed by Germans. In the struggle, Pinchas was killed.

Avraham and Moshe David were given refuge in the barn of a Polish farmer. In the spring of 1943 the two returned to the forest. In June 1943, on the eve of Shavuot, Moshe David was murdered by Poles. Avraham joined the Jewish partisans in the Nacza Grodno Forest and fought alongside them until the area was liberated in July 1944.

Following the war, Avraham returned to Dugalishok. After bringing Pinchas’ remains for reburial in the Radun cemetery, he traveled to Italy and stayed at the Selvino children’s home, a Youth Aliyah institution managed by Moshe Zeiri, a soldier in the Jewish Brigade. In July 1946, Avraham left for Eretz Israel on the Katriel Joffe, but the ship was caught by the British and its passengers sent to Cyprus. After his release, Avraham came to Eretz Israel and stayed with Youth Aliya members at Kibbutz Mishmar Hasharon.

Avraham fought in the War of Independence, in the battles along the road to Jerusalem. He later settled in Tel Aviv, where he worked in the military industries and studied economics and market management. He worked in publishing and established the Beit Alim publishing house.

During his testimony at the Eichmann trial, Avraham told the story of the Jews of Radun. He later published two books about his experiences, and continues to tell his story before varied audiences. Avraham's testimony was filmed as part of the “Witnesses and Education" series produced by Yad Vashem and the Multimedia Center of the Hebrew University of Jerusalem. Avraham married Ayala, also a Holocaust survivor, whom he met in Selvino. They have three children and nine grandchildren.